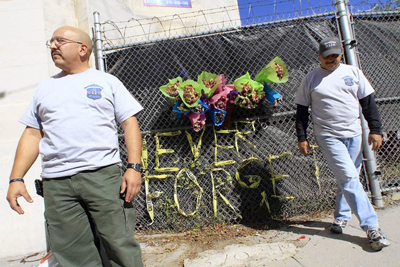 LAPD Officers J.C. Duarte, left, and Harold Marinelli visit an unofficial memorial for an officer who was killed while assessing a traffic accident on Riverside Drive five years ago. Officers from all over the city have visited the tribute, which displays the fallen policeman's serial number. (Irfan Khan, Los Angeles Times / November 11, 2011)

It hides on a busy boulevard in plain sight.

It occupies a few feet of cyclone fence, a stitch of weary sidewalk, and part of a beam supporting a bridge that stretches across the freeway near Griffith Park.

Rows of dried flowers cling to the fence.

Beside the flowers, a stream of police tape forms the phrase Never Forget.

Glued to the beam, well above the sidewalk for all to see, is a sheet of blue steel proclaiming five numbers: 37029.

Here lies the memory of a man who died as he went about his work, trying to do things right.

He was a Catholic, a baseball player, a fan of country crooner George Strait, raised in a mill town in Northern California.

He was an officer for the Los Angeles Police Department: serial number 37029.

Officer 37029 had two sons, and when tragedy struck, they were ages 1 and 3. He had yet to marry their mother but if everything had gone as planned, he and Marisabel would now be husband and wife.

The accident, she recalls, voice shaking, took place days before they were to wed.

It happened on a winter night as he surveyed the aftermath of a traffic accident. He stood in the street, ever diligent, scoping out what happened. Near him on Riverside Drive was a construction site and shadows. Soon came a car and a driver who could not be blamed for failing to see in the confusing darkness.

The impact sent Officer 37029 flying. His head smacked the street. Blood pooled in his brain. He was rushed to a hospital. It was too late.

In their grief, the men and women at his division, the LAPD's Northeast, put up police tape and flowers.

One year later and the fence had new tape and new flowers every few weeks.

Two years later and cops from all over the city and the region were stopping by, adding cards and photographs.

Three years later, dozens of police from the Northeast Division lined up on the sidewalk one night to take roll call.

This Oct. 22 marked the fifth hard anniversary. A pair of veteran Northeast Division beat cops who barely knew Officer 37029 had become the tribute's caretakers. "We don't want anybody to go by the wayside," says one of them, J.C. Duarte. "Imagine giving your all to protect the public and nobody remembers."

When the spot needs sprucing, Duarte and Harold Marinelli stop by and replace flowers, sweep dirt, trim weeds and paint over nearby graffiti. Both note that the city named an intersection on the other side of the bridge for their fallen colleague. The press came. The police chief and a city councilman came. People knew about it.

"That's the official memorial," Duarte says, standing in his street clothes by the fence the other day. "This is the unofficial memorial. This is for his law enforcement family. That's why we highlighted the number. It defines us. Cops understand."

Duarte leans forward to examine a pair of police handcuffs someone recently notched to the fence. He brushes dirt from a worn, bronze-colored plaque that has been cemented into the cracked sidewalk by cops from South L.A.

The plaque is 10 inches long and 6 inches wide. It can't be read by passing drivers. Few walk the sidewalk, so few know it exists.

At its center are letters spelling out the name of Officer Landon Dorris.