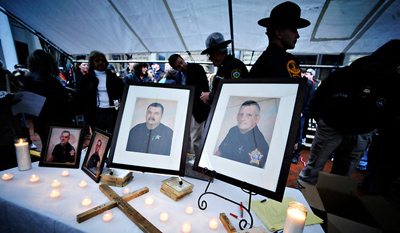 A vigil for four police officers from Buchanan County, Va., who were shot in March 2011. Two were killed, and two were wounded. (Jeff Gentner/Associated Press)

As violent crime has decreased across the country, a disturbing trend has emerged: rising numbers of police officers are being killed.

The 2011 deaths were the first time that more officers were killed by suspects than car accidents, according to data compiled by the International Association of Chiefs of Police. The number was the highest in nearly two decades, excluding those who died in the Sept. 11 attacks in 2001 and the Oklahoma City bombing in 1995.

While a majority of officers were killed in smaller cities, 13 were killed in cities of 250,000 or more. New York City lost two officers last year. On Sunday, four were wounded by a gunman in Brooklyn, bringing to eight the number of officers shot in the city since December.

"We haven't seen a period of this type of violence in a long time," said Commissioner Raymond W. Kelly of the New York Police Department.

While the F.B.I. and other law enforcement officials cannot fully explain the reasons for the rise in officer homicides, they are clear about the devastating consequences.

"In this law enforcement job, when you pin this badge on and go out on calls, when you leave home, you ain't got a promise that you will come back," said Sheriff Ray Foster of Buchanan County, Va. Two of his deputies were killed in March 2011 and two wounded - one of them paralyzed - by a man with a high-powered rifle.

After a spate of killings in early 2011, Attorney General Eric H. Holder Jr. asked federal authorities to work with local police departments to try to come up with solutions to the problem.

The F.B.I., which has tracked officer deaths since 1937, paid for a study conducted by John Jay College that found that in many cases the officers were trying to arrest or stop a suspect who had previously been arrested for a violent crime.

That prompted the F.B.I. to change what information it will provide to local police departments, the officials said. Starting this year, when police officers stop a car and call its license plate into the F.B.I.'s database, they will be told whether the owner of the vehicle has a violent history. Through the first three months of this year, the number of police fatalities has dropped, though it is unclear why.

Some law enforcement officials believe that techniques pioneered by the New York Police Department over the past two decades and adopted by other departments may have put officers at greater risk by encouraging them to conduct more street stops and to seek out and confront suspects who seem likely to be armed. In New York and elsewhere, police officials moved more officers into crime-ridden areas.

"This technique has become more popular across the country as smaller departments have followed the larger cities and tried to prevent crime," said Chuck Wexler, executive director of the Police Executive Research Forum. "Unlike several decades ago, there is this expectation that police matter and that police can make a difference."

Commissioner Kelly said, "We try to put those officers where there is the most potential for violence." However, he pointed out that most of the officers who have been shot in New York since December were not part of a proactive police deployment but were responding to emergencies.

Some argue that the rise in violence is linked to the tough economy. With less money, some states are releasing prisoners earlier; police departments, after years of staffing increases, have been forced to make cutbacks.

"A lot of these killings aren't happening in major urban areas," said James W. McMahon, chief of staff for the International Association of Chiefs of Police. "One of the concerns we are looking at is that a number of officers are being laid off or furloughed or not replaced."

The police chief in Camden, N.J., J. Scott Thomson, whose force of 400 was cut by nearly half last year because of financing issues, said that having fewer officers on the street "makes it that much more difficult to create an environment in which criminals do not feel as emboldened to assault another person, let alone a law enforcement officer."

The murder of a veteran officer last April in Chattanooga, Tenn., was typical of many of the 2011 episodes.

Sgt. Tim Chapin, a veteran nearing retirement, rushed to provide backup to officers who had responded to reports of a robbery outside a pawnshop and were under fire. Sergeant Chapin got out of his car and chased the fleeing suspect, who had been convicted of armed robbery. During the pursuit, the sergeant was fatally shot in the head.

As part of the F.B.I.'s efforts to prevent officer deaths, the bureau trains thousands of officers each year, highlighting shootings like the one in Chattanooga to teach officers about situations in which they are most vulnerable. Those situations are typically pursuits, traffic stops and arrests, said Michelle S. Klimt, a top F.B.I. official at its Criminal Justice Information Services Center in Clarksburg, W.Va., who oversees officer training.

"Every stop can be potentially fatal, so we are trying to make sure the officers are ready and prepared every single day they go out," Ms. Klimt said. "We try and teach that every day you go out, you are going to be encountered with deadly force by someone trying to kill you."