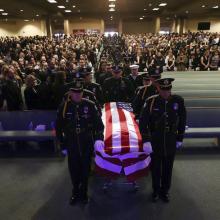 Family, friends and law enforcement officials gathered Friday to honor a fallen Whittier police officer described as the "best of the best," who was killed in the line of duty last month.

Whittier Officer Keith Wayne Boyer, 53, joined the department in 1989. He played the drums in a classic rock tribute and cover band that often performs for charity, and is survived by four children.

He was shot and killed in a shootout with a recently released gang member while responding to a minor car accident with another officer.