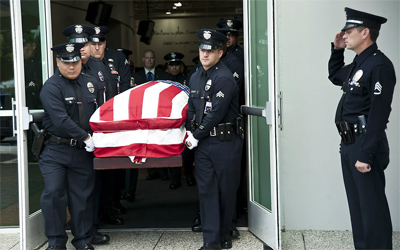 WEST COVINA - Friends and family members on Tuesday remembered Jesus "Jesse" Ravega as a humble man of God, a strong family man and a passionate worker who was ready to risk his life every day as a Los Angeles police officer.

Hundreds of friends and family members gathered at Faith Community Church, 1211 E. Badillo St., on Tuesday to say goodbye to Ravega, a West Covina resident who died on Sept. 2 in a motorcycle crash.

Ravega, 48, was on his way to work when he fell at the 101-110 Freeway interchange while trying to pass a tractor-trailer, which then ran over the officer.

"Jesse was an absolute hero to everybody. His hero work didn't stop with the LAPD," said Lt. Jay Roberts, who worked at the Foothill Division in Pacoima with Ravega. "Jesse was ready (to die) every day."

Ravega, a 24-year LAPD veteran and anti-gang detective, was described as having a tremendous love for his family - his wife of 20 years, Jeannette, son, Joshua, and daughters, Jenness and Julia - and his Christian faith.

"He loved the Lord. He loved his family. He loved his church. He thoroughly enjoyed working for the LAPD," Jeannette wrote in her husband's program. "He would always say with a grin on his face, 'I can't believe I get paid to do this!"

He was a strong Christian who attended the Lighthouse Baptist Church in La Verne, sang in the choir and taught Sunday school, friends said.

"Your father was a great man," Beck said to the Ravega children. "He was a hero among heroes. He displayed courage and compassion. He was a person who could be depended on to do the right thing."

He recalled a 2005 shootout where police units pursued two drunken drivers who shot at the officers, including Ravega. It ended after 400 rounds of bullets were exchanged and one suspect was dead.

"When asked how he survived, he said, 'It just wasn't my time,"' Beck said. "So then we ask, why now, why was this Jesse's time? We can never know that."

According to Ravega's first-hand account of the incident, he credited his survival to God.

"My training was of help, but what truly saved me from serious injury that day was my Heavenly Father watching over me," he wrote. "If God had chosen to take my life, I knew that I had a home in Heaven prepared for me ... Our job is very dangerous and at any given moment our lives can be taken away."