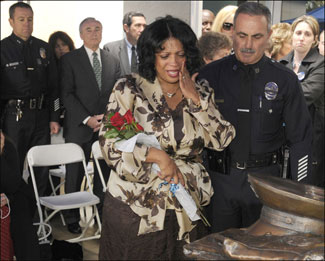 Lisa Simmons, the wife of slain SWAT Officer Randal Simmons, holds back the tears after Captain Steven Zipperman unveiled the memorial statue. Personnel assigned to the West Valley Area Community Police Station and many other members of the LAPD family throughout the city, payed tribute to officers who were killed in the line of duty. (John McCoy/Staff Photographer)

RESEDA - Family and friends of fallen Los Angeles SWAT Team member Randal Simmons have struggled to cope with his absence since he was killed a year ago today. His wife, Lisa Simmons, and their children found some comfort in the religion they shared so deeply with him.

"The first year has been hard," she said. On Friday, his fellow officers held a memorial service and unveiled a monument dedicated to Simmons and three other officers who were killed in separate incidents.

The dedication took place at the West Valley police station, across the street from a park that will be named after the slain officer. Simmons, 51, died in a shootout after a mentally ill man killed his family and barricaded himself in his Winnetka home. He was the first and only Los Angeles Police Department SWAT officer to die in the line of duty.

Simmons was remembered not only as a leader and a mentor in the elite SWAT unit, but a heroic presence in his community. He had long spent his spare time guiding inner-city kids away from gangs. As a vice officer downtown, he would try to talk prostitutes into leaving the streets. Capt. Jeffrey Greer, commanding officer of the Metropolitan Division, was Simmons' close friend and boss. He said that after the tragic episode, one of the officers Simmons had mentored tried to take on some extra responsibilities.

Edwin Rivera, a troubled 20-year-old, went from room to room and shot dead two of his brothers and then his father. About 9 p.m., he called 911 to admit his deeds: "Come get me," he told police. The LAPD SWAT Team stormed the house about 12:30 a.m. Feb. 7. But Rivera was waiting to ambush them. From his hiding place in the living room, he shot Simmons and Officer James Veenstra.

Los Angeles firefighters went into the house and rescued Simmons and Veenstra from a hail of gunfire. Simmons died. Veenstra, 51, survived with a bullet in his jaw. An LAPD sniper shot Rivera dead as he fled the house seven hours later.

The LAPD has not made any policy changes for its SWAT Team because of the incident. "We're moving forward as he would want us to do," said LAPD Valley Deputy Chief Michel Moore. "We miss him and he's still in our hearts and minds. His family is still very much a part of LAPD (and) part of us."

Rivera's last surviving brother, 28-year-old Wilfredo, couldn't be reached Friday. Lisa Simmons said he's in her prayers. "My heart and prayers go out to him," she said. "I'm sure it's been a hard year for that one brother that's still alive."

She admitted it has been a tough year for her and her kids, too. It showed when officers unveiled the small monument to her husband and others who died in the line of duty. A big smile spread across her face when she saw it - a folded police uniform with a cap on top. She read the name of her husband etched into the base.

A second or two later, her smile dissolved. The tears came again.