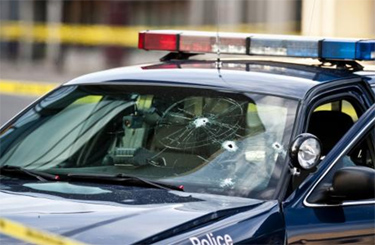 Police officer deaths, including those fatally shot in the line of duty, are on pace to rise for the second straight year, despite a sustained decline in violent crime across the country.

Overall officer deaths are up 14% so far in 2011, while deadly shootings have increased by 33%, according to a midyear report by the National Law Enforcement Officers Memorial Fund, which tracks law enforcement fatalities.

If fatal shootings continue at the current rate, gunfire-related deaths would represent the primary cause of officer fatalities this year, according to the report. For the past 13 years, traffic incidents have accounted for the largest number of officer deaths.

The police group found that deadly shootings reached a 20-year high in the first half of this year. Forty officers were killed by gunfire, up from 30 in the first six months of 2010.

Craig Floyd, the memorial fund's chairman, said the numbers suggest that recent cuts in local law enforcement training and equipment budgets because of the economy may be contributing to the increase in deaths.

"When you slash those budgets time and time again, you are putting communities at risk and officers at risk," Floyd said.

Last year, nearly 70% of police agencies cut back or eliminated training, according to a survey of 608 departments conducted by the Police Executive Research Forum, a law enforcement think tank.

Bernard Melekian, director of the Justice Department's Office of Community Oriented Police Services, said it was "too early" to conclude that budget reductions were linked to the rising deaths.

He said the number of officers killed in apparent ambushes "are a concern to me."

"We need to spend more time (analyzing) cases classified as ambushes," Melekian said, referring to an informal review of this year's shooting deaths.

Before the end of January in Miami and St. Petersburg, Fla., four officers died in ambush-style attacks as police attempted to serve arrest warrants.

John Rivera, president of the Florida Police Benevolent Association, said he was attending memorial services for two of the officers in Miami, when he learned that two others were killed in St. Petersburg.

"What we have seen in recent cases is that the bad guys are simply outgunning our guys," Rivera said. "It's like we're showing up with bows and arrows when they have AK-47s (assault rifles)."

The sharp spike in the 2011 numbers is due partly to a deadly January, when 11 officers were fatally shot. In one 24-hour period that month, three officers were killed and eight wounded in shootings across the country.

The mounting casualties prompted Attorney General Eric Holder to launch a federal officer-safety initiative in March that required federal prosecutors to meet with state and local police to ensure they were taking advantage of federal grants for bullet-resistant vests, training and other resources.

Melekian said he was meeting with Justice officials Wednesday to determine what more the federal government could do to assist local law enforcement agencies.

"This has been a very violent first part of the year," Rivera said. "If this continues, it could be one of the deadliest in the history of Florida."