BOSTON -- The FBI released photos and video Thursday of two suspects in the Boston Marathon bombing and asked for the public's help in identifying them, zeroing in on the two men on surveillance-camera footage less than three days after the deadly attack.

FBI agent Richard DesLauriers said the photos of the two men came from surveillance cameras near the explosion sites. One man is seen wearing a light-colored baseball cap, the other a dark cap. The man in the dark cap set down a backpack at the site of one of the blasts, DesLauriers said.

Within moments of the announcement, the FBI website crashed, perhaps because of a crush of visitors.

The images were released hours after President Barack Obama and first lady Michelle Obama attended an interfaith service at a Roman Catholic cathedral in Boston to remember the three people killed and more than 180 wounded in the twin blasts Monday at the marathon finish line.

The break in the investigation came just days after the attack that tore off limbs, shattered windows and raised the specter of another terrorist attack on U.S. soil.

The suspects are considered armed and extremely dangerous, DesLauriers said, and people who see them should not approach them.

"Do not take any action on your own," he warned. 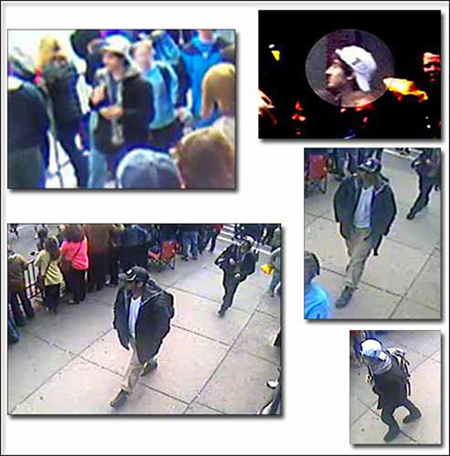 The FBI released a video and photos of two men in Boston Marathon bombing investigation during a press briefing Thursday in Boston. (Courtesy photos)

Generally, law enforcement agencies release photos of suspects only as a last resort, when they need the public's help in identifying or capturing someone.

Releasing photos can be a mixed bag: It can tip off a suspect and deny police the element of surprise. It can also trigger an avalanche of tips, forcing police to waste valuable time chasing them down.

At the Cathedral of the Holy Cross earlier in the day, Obama declared to the people of Boston: "Your resolve is the greatest rebuke to whoever committed this heinous act." He spoke in almost mocking terms of those who commit such violence.

"We finish the race, and we do that because of who we are," the president said to applause. "And that's what the perpetrators of such senseless violence-these small, stunted individuals who would destroy instead of build and think somehow that makes them important-that's what they don't understand."

"We will find you," he warned those behind the attack.

Video and photos recovered in the investigation are being examined and enhanced by an FBI unit called the Operational Technologies Division, said Joe DiZinno, former director of the FBI lab in Quantico, Va.

"When you have something that is this high-profile, they are going to use every available resource that they have," said former Miami federal prosecutor Melissa Damian Visconti.

The investigation will probably collect about a million hours of videotape from fixed security cameras and cellphones and cameras used by spectators, said Gene Grindstaff, a scientist at Intergraph Corp., a Huntsville, Ala., company that makes video analysis software used by the FBI and other law enforcement agencies.

But after years of investigating terrorist incidents and other crimes, the FBI is practiced at cataloging, categorizing and analyzing such evidence and will winnow it down dramatically, he said.

"Back in the days of 20 years ago, you were lucky if you had video and it was probably of poor quality and it took a tremendous amount of enhancement. Today you have a completely different issue," Grindstaff said.

Investigators can set the video analysis software so that it automatically searches for certain types of objects or people matching a height and weight description. The software can also spot patterns that analysts might not notice, such as a certain car that turns up in different places, Grindstaff said.

DiZinno, who ran the FBI lab from 2007 to 2010, said any retrieved bomb components such as the pressure cookers, shrapnel and pieces of timers or wire will be closely examined for fingerprints, DNA, hairs and fibers.

The bomb components would be traced by figuring out the item's maker, where each piece is typically purchased and whether the device resembles any bombs the FBI has seen in past attacks. The FBI lab keeps a detailed file on past bombings, including many overseas attacks.

"Let's say there was a timer," DiZinno said. "Was there a serial number? Who was the manufacturer? That can provide leads for investigators."

One pressure cooker maker, the Fagor Group in Spain, said that it has been contacted by U.S. investigators and that company officials are extending full cooperation. The company sells 250,000 pressure cookers a year in the U.S. and 1 million worldwide.