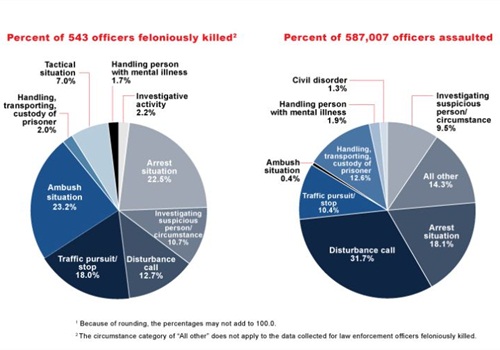 Seventy-two officers were feloniously killed in the line of duty in 2011, compared with 56 from the year before, the FBI announced today.

Another 53 officers died in accidents while performing their duties, and 54,774 officers were assaulted in the line of duty. The data comes from the FBI's annual report, "Law Enforcement Officers Killed & Assaulted."

The profile of slain officers emerged as such. Most (50) worked for municipal police departments. The average age of the slain officers was 38. Their average length of service was 12 years.

Circumstances of the line of duty deaths varied. By a slim majority, ambushes were the leading situation (23.2% of officers) in the officer deaths. Officers also died during arrests (22.5%), traffic stops or pursuits (18%), disturbance calls (12.7%), and while investigating a suspicious person or circumstance (10.7%). To a lesser degree, officers died during a tactical situation (7%), investigative activity (2.2%), handling prisoners (2%), and handling a mentally ill person (1.7%).

Of the 53 officers who died accidentally, 39 were killed as a result of vehicle-related accidents.

The report "clearly demonstrates what we already know-despite the dangers of law enforcement, the profession continues to attract brave men and women willing to make the ultimate sacrifice to protect their fellow citizens," according to an FBI release.