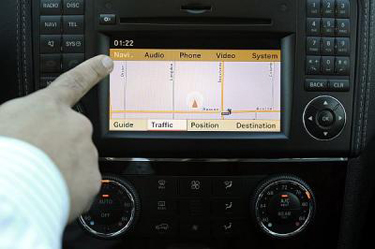 Navigation systems are among driver distractions worrying federal safety regulators. Carmakers are being urged to disable functions such as text messaging and Internet browsing unless the car is parked. (Michael Owen Baker/Staff Photographer)

But in the Car Buff Capital of the Nation, Los Angeles motorists may balk at any more hands-on interference from Uncle Sam.

"We have all the bells and whistles. We want everything. Especially in our cars."

Under guidelines issued Thursday, the U.S. Department of Transportation proposed carmakers design dashboards that limit motorists from taking their eyes off the road and their hands off the wheel.

It urged them to disable functions such as text-messaging, tweeting, Internet browsing, phone dialing and entering addresses into built-in navigation systems unless the car is parked.

It's also recommending guidelines to limit any hand-held electronics and distractions from voice-activated systems.

The crux: limiting the amount of time drivers take their eyes off the road to two seconds.

The department's National Highway Traffic Safety Administration will hold public hearings next month to solicit industry and consumer reactions to the voluntary guidelines.

"These guidelines are a major step forward in identifying real solutions to tackle the issue of distracted driving for drivers of all ages."

In Los Angeles, drivers were still adjusting to laws that bar texting and hand-held cellphone chats.

Some said any more limits to high-tech car systems would curtail how Angelenos conduct their most frequent pastime - freeway commutes.

"I think it's pretty dumb, to be honest with you," said Alex Gonzales, 27, of San Fernando, a Toyota Camry driver ogling a new Ford F-150 Metal Mulisha pickup. "They're just overdoing it with the tickets to the phone, everything.

"What's next? Are they going to arrest your girlfriend for doing her makeup from the passenger seat?"

Federal safety regulators have become increasingly alarmed over fatalities caused by such distractions as in-car cellphone use.

In 2010, 3,092 people nationwide - or 9.4 percent of road deaths - were killed in crashes related to driver distraction, according to the NHTSA.

In December, the U.S. National Transportation Safety Board called cellphone use in cars a public-health epidemic on the scale of smoking or drunken driving, according to Businessweek.com. It recommended all states ban phone use by drivers, even with hands-free devices. The safety board can't make or enforce rules.

But the warnings come as carmakers add more high-tech gizmos for navigation, Internet and smartphone use.

This year, automotive analysts predict a 29percent increase in the number of new cars and light trucks sold in North America fitted with smartphone and embedded-connectivity units.

That means 5.8 million such electronic devices installed this year, according to QUBE, an automotive data provider for just-auto.com. By 2026, forecasters say all vehicles sold in North America and Japan will be offered with such high-tech systems.

The Alliance of Automobile Manufacturers, a trade organization, said the government drew heavily from guidelines established in recent years by the group.

"The alliance is pleased to receive this recommendation from NHTSA for creating thorough, effective guidelines," it said in a statement, noting its guidelines were based on the "two-second rule" at the core of those it already developed.

But as Shams demonstrated an advanced navigation and Web browser built into a Mercedes-Benz SUV trade-in, he said L.A. drivers have already come to depend on them.

It would almost be unthinkable for anyone to have to have to pull over and park to stay connected.

"They want now," he said. "They want the next cool thing while driving - to make restaurant reservations, hotel reservations, doctor appointments. Instead of pulling over and using their cellphone, they can drive with their nav and Bluetooth."

Officials of the Ford Motor Company, however, were more circumspect.

Down the street, Galpin Auto Sports unveiled a 2012 Ford Focus it designed with a built-in, Motown-quality sound studio.

The rolling studio, part of a Ford "Gimme the Gig" contest, will allow musicians to compete for a recording contract with Don Was, the Grammy Award-winning producer for the Rolling Stones.

But while the subcompact sported a microphone dangling from its headliner, Ford recommended recording any would-be yodeling hits outside the car, and not on the 405 Freeway.

"Certainly, this will not be turned on while the vehicle is in motion, said Ford spokeswoman Debra Hotaling based in Irvine, as a rock guitarist riffed for Focus. "At Ford, we're all about about hands on the wheel, eyes on the road.