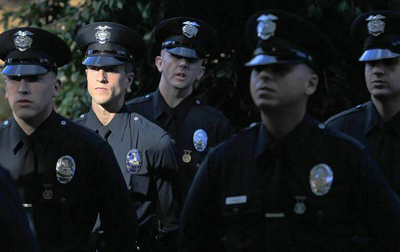 New recruits assemble for their graduation exercises at the Los Angeles Police Academy. The LAPD has seen a decline in qualified applicants over the last several months, and officials fear the department will remain understaffed if the decline continues. (Brian van der Brug, Los Angeles Times / November 27, 2013)

Less than a year after reaching its long-sought goal of 10,000 officers, the Los Angeles Police Department is now seeing a steady decline in its ranks as the city struggles to find enough qualified candidates.

Fewer people are applying to join the LAPD and, of those who do, a significantly higher number of them are being disqualified from consideration. Officials say budget cuts have slashed the advertising used to draw recruits while other departments are luring top talent with higher salaries than the LAPD offers.

Since the decline began several months ago, the LAPD is down more than 100 officers. The department needs to hire about 350 officers a year to make up for normal attrition, and officials say they could remain understaffed for years if the current trend holds. Earlier this year, Mayor Antonio Villaraigosa and Chief Charlie Beck celebrated the 10,000-officer milestone, a target the city has sought to attain since the L.A. riots in 1992.

"Our entire plan is getting screwed up.... We don't see an end to it," said LAPD Asst. Chief Sandy Jo MacArthur, who oversees recruitment and training for the department. "It is a very big red flag for us. Once you start losing ground, it is so hard to climb back."

Also, the number of women and blacks - and especially black women - making it into the training academy has dropped considerably. That leaves the department far short of diversity goals in recent academy classes; the goals were put in place decades ago to counter discriminatory hiring practices. None of the 30 rookies who recently graduated from the academy, for example, were black and only five were women.

Officials pointed to several other factors they said are contributing to the shortage.

To start, not enough people want to join the LAPD. The department needs about 865 people each month to begin the lengthy application process to become a cop - a large crop that inevitably gets whittled down as people drop out or are disqualified. Currently, the LAPD is getting between 600 and 700 new applicants, said John Dunlop, chief of the personnel department's backgrounds division.

The LAPD is facing tougher competition from other law enforcement agencies for top candidates.

Although the LAPD has the advantage of a strong reputation, some other agencies pay significantly higher starting salaries, Dunlop and MacArthur said. The base starting pay for an LAPD recruit is $48,462.

Budget cuts also have forced the personnel department to do away with nearly all of the billboard advertisements and commercials on radio and television stations that it used to rely on to spread the word that the LAPD was hiring, said Bruce Whidden, a spokesman for the personnel department. Also gone are $1,000 recruitment incentives the office used to pay to current officers and others whenever someone they convinced to apply completed the academy.

"We have been living off the momentum built up over the years, but it is slowing down," Whidden said. "The LAPD is not the only game in town anymore."

The larger problem, however, is with the people who do want to join the LAPD.

With the already depleted applicant pool, the number of people failing to make it through the city's vetting process has jumped by a third, according to city figures.

Many of the applicants are being eliminated because of their responses to 173 questions about past drug use, run-ins with the law, financial problems and other potential possible character flaws, officials said.

The spike in disqualifications has perplexed officials. Dunlop had no explanation for it, but speculated a broader cross-section of people are applying to become cops, including people who weren't planning on the career path and so did not make an effort to keep their records clean.

"We aren't recruiting at the Vatican. We have applicants who have lived their lives.... There are a lot of issues to investigate," he said.

The time it takes to complete those background investigations and the rest of the application process has compounded the recruit shortage. With a staff that has been downsized by a third in recent years, Whidden said it typically takes six months before a recruit is cleared to enter the academy - about twice as long as MacArthur said the LAPD would like.

This summer the pool of available candidates nearly ran dry, forcing the department to cancel some academy classes and cobble together undersized groups for other classes. Only 88 recruits have entered the academy since July - 45% below the 160 required to keep up with the attrition rate, MacArthur said.

The dropoff in recruits has led to a power struggle, as LAPD officials in recent months have pressured the personnel department in public comments and private meetings to cede some control over parts of the application process and to share with the department confidential information about the applicants who are disqualified.

"If we don't know where people are running into trouble, then we can't help address it," MacArthur said. "We're doing the same things we've had success with in the past, but now suddenly we're seeing this drop. The question is, 'What is going on?'"