Skip to main content
21
Jun 2018
In a first, LAPD voluntarily releases body camera video of a suspect who died in custody 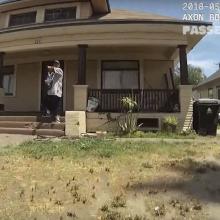 James Queally, LA Times
In a first, LAPD voluntarily releases body camera video of a suspect who died in custody

The Los Angeles Police Department, roiled more than two decades ago by an infamous video of police brutality, entered a new era Wednesday, publicly releasing police body camera video in what will be a regular process aimed at increasing transparency when officers use force.

The department’s hope is to provide the public with a clearer view of the chaotic scenarios and split-second decisions officers face at a time when controversial officer-involved shootings in Los Angeles and across the country have eroded trust between police and the communities they protect.

The LAPD has equipped most of its officers with body cameras and video equipment in patrol cars, and after much debate this year adopted one of the nation’s most liberal policies for making the recordings public.

“What you will see from these presentations is policing at its rawest,” LAPD Chief Charlie Beck said at a news conference.

Ed Obayashi, a Plumas County sheriff’s deputy and police force expert, said the LAPD policy on body camera videos could become a model for other departments and provide the public with a clearer view of how law enforcement operates.

“More agencies are releasing videos of incidents, especially when you’ve got YouTube out there and you’ve got everyone with their cellphones,” he said. “That’s a motivation for departments to sometimes show their version of events and that’s the body cam. The trend is there.”

The implementation of a new video policy was a stark turnaround for a police department that suffered widespread condemnation when a bystander videotaped several police officers beating Rodney G. King after a high-speed chase that ended in Lake View Terrace.

The video released Wednesday — which depicts portions of a May 6 altercation between police and 25-year-old Jose Chavez in the 4400 block of Towne Avenue in South L.A. — was cut into several segments and narrated at times by LAPD officials. Chavez, who armed himself with a pipe at one point during the confrontation, died at a hospital shortly after being struck by beanbag rounds and shocked with a Taser. A cause of death has not been determined.

The 17-minute video shows portions of the clash, including the moments when less-lethal force is used as well as Chavez’s arrest, but also omits some sections of the two-hour standoff. Beck said more footage might be released when an investigation into the incident is complete, but it was unlikely that the near 50 hours of video evidence collected during the incident would be made public.

While civil liberties advocates hailed the release as a radical shift for a department that has rarely made such recordings public since its officers began wearing body cameras in 2015, they also expressed concern about the “highly edited” nature of what the LAPD revealed Wednesday.

“If the department releases video selectively with large sections of video withheld, they are still saying: Just trust us, there is nothing on that video you need to see,” said Peter Bibring, director of police practices for the American Civil Liberties Union in Southern California.

Still, some law enforcement experts said the move was a significant step forward in California, where there are no uniform laws governing when, or if, body-worn and dashboard camera recordings linked to serious use-of-force incidents should be made public. Multiple legislative efforts to give guidance on the issue have stalled, leaving a scattered set of rules about public access to be settled at the local level across the state.

Obayashi said “what is unique about this video is the level of production. This isn’t the typical press conference you see.… Here you’ve got a full-blown professional production that is laden with visual aids, background information and a narrator.”

Under the new rules approved in March by the Police Commission, the civilian panel that oversees the department, the LAPD must now release video related to officer-involved shootings, deaths that occur in LAPD custody or other encounters in which someone is killed or seriously injured.

The video and audio to be released will include images captured by officer-worn cameras and dashboard cameras, 911 recordings and images and video captured by nearby surveillance cameras or bystanders’ cellphones.

The LAPD is required to make the recordings available to the public within 45 days, though officials can delay the release of video if the police chief and two commissioners unanimously decide there is a valid and specific reason for doing so. Such delays will be reevaluated every two weeks and will be subject to a vote by the full Police Commission after 28 days.

Opponents of the policy — which included Los Angeles Dist. Atty. Jackie Lacey and the Los Angeles Police Protective League, had worried the release of videos in controversial incidents could further inflame tensions between the LAPD and residents or endanger future investigations. On Wednesday, the Police Protective League said it was hopeful the video could serve as an educational tool for residents who sometimes misunderstand the nature of police altercations.

“While we still maintain our concerns relative to releasing video evidence before all investigations are completed, the release of video with the appropriate context will be helpful to the public to better understand the dangerous incidents officers must respond to,” the union said in a statement.

In the May incident, officers were responding to a call about a man, later identified as Chavez, who was seen “walking into people’s property with a brick,” according to a 911 recording made public Wednesday.

Officers can be heard repeatedly asking Chavez if he needs help or medical attention when they approach, but Chavez appears to ignore them, according to body-worn camera video.

“You OK, man? People are concerned for you man,” one of the officers can be heard saying.

After several minutes, Chavez became “agitated” and approached the officers, according to Cmdr. Alan Hamilton, who heads the LAPD’s Force Investigation Division. Chavez eventually ran onto a porch and knocked on a door, then picked up a “large metal dustpan” and began swinging it, Hamilton said.

The video then shows Chavez inhaling from a bottle of what Hamilton described as “automotive fluid” and pouring some on himself. He later picked up a metal pipe.

Officers fired rounds from a beanbag shotgun at Chavez several times, before eventually deploying a Taser and moving in to arrest him. Chavez continued to struggle after being placed in handcuffs, and his breathing “became labored” and then stopped as officers took him out toward the sidewalk, Hamilton said in the video.

Paramedics were called to the scene. Chavez was pronounced dead at Los Angeles County-USC Medical Center less than an hour later.

Beck said he does not believe the less-lethal force used by officers contributed to Chavez’s death, and suggested he may have been under the influence of narcotics. A full toxicology screen to determine the cause of death may not be completed until mid-July, according to Ed Winter, a spokesman for the Los Angeles County Coroner’s Office.

Beck insisted the information released Wednesday, which was reviewed by some members of the Police Commission, was not intended to advance a narrative beneficial to the LAPD.

“We will strive to make sure that these things are put forward in a very balanced way that is not skewed toward either the department’s position or the defendant’s position,” he said.

But Luis Carillo, the attorney representing Chavez’s family, described the video as “slanted” and criticized gaps in the sequence of events that led police to use force. Chavez was asthmatic, according to Carillo, who also questioned if the 25-year-old may have suffered positional asphyxia when officers held him down during the arrest.

Glimpses of LAPD body-worn camera footage have been rare in the past. In some cases, like the much-criticized killing of a homeless man on skid row in 2015, videos became public after they were entered as evidence in lawsuits. Beck, who was normally against making such footage public, also released a video showing an 18-year-old armed with a gun before he was shot and killed by police in 2016. In the days leading up to Beck’s decision — which occurred within a week of the shooting — protesters had taken to city streets based on a claim the teen was unarmed.

If the department’s intent in releasing videos under the new policy is to win over public trust, Bibring said, the LAPD needs to provide an unvarnished look at future incidents.

“If their goal is transparency, not just a public relations effort, then they need to provide access to the full video,” he said.