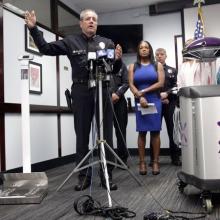 While it resembles something from a Hollywood movie, the Los Angeles Police Department hopes a high-tech robot can kill bacteria in a police facility the state declared unsanitary.

“The cleanliness and safety of this facility has always been a challenge and a concern of LAPD,” Moore said.

The deployment of the robot called “LightStrike” and the shoe sanitizer called “HealthySole” comes after officers fell ill last month and state officials levied multiple fines for rodent infestations and other unsanitary conditions at the facility station responsible for protecting skid row and other parts of downtown.

The unsanitary conditions in the 42-year-old building became the source of growing anger last month inside the station, as some officers threatened to seek transfers and city leaders scrambled to address the problems.

The board of directors for the Los Angeles Police Protective League, the police labor union, said last month that “officers worry enough about being shot or injured policing the streets of Los Angeles” and shouldn’t fear taking home infectious diseases.

Moore praised the union for purchasing and bringing the footwear sanitizer device to the department’s attention.

Jerretta Sandoz, the union’s vice president, said the the safety and health of officers and employees is a concern. She said Moore and other leaders took the concerns seriously and looked for solutions.

“This is a good first step,” she said. “We want to make sure it’s at all stations.”

Other steps to sanitize the facility include removing landscaping around the facility to prevent breeding grounds for rodents. Cleaning crews have increased work hours in the building to 20 hours each day, including weekends.

“I believe it will go a long way to fix a challenging problem,” Moore said, adding that the building will never be free of germs. 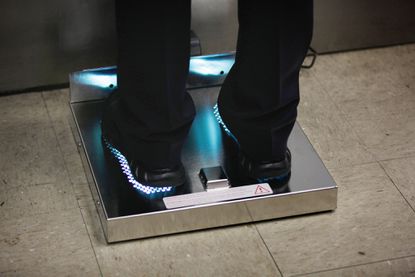 In November, among the violations at the station on East 6th Street, according to the state, was that the LAPD did not train employees about how the dangerous bacterial disease typhus is transmitted, its symptoms or measures for prevention.

The department also did not have a program to exterminate and control rats, fleas, roaches, gnats, mosquitoes or grasshoppers in the building. Inspectors found all those in the facility, records show.

The division has 414 sworn officers — the largest number in the city.

The station’s proximity to skid row makes it even more challenging to keep the building disease free with the thousands of homeless people living on nearby streets.

The issues at the Central Division come amid larger concerns about disease and filth across downtown, notably a vermin infestation at City Hall last year. One city employee was diagnosed with typhus, a disease that can be spread by rodents. City Hall workers said they saw fleas, rodent droppings and plants eaten by vermin in the building.