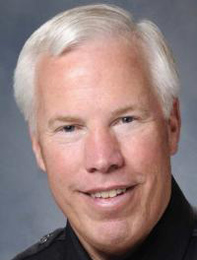 Gannon, 56, will oversee about 1,100 police and security officers.

"I'm excited," Gannon said. "I'm excited at the opportunity. The airport is a complex place with a lot of moving parts and I really look forward to working with all of the airport partners and all the personnel at the department."

Gannon recently retired from the LAPD, where he served 34 years, most recently as deputy chief of the agency's South Bureau, overseeing 1,700 officers in South Los Angeles and the Harbor Area. His career included a stint as commander at the Harbor Division, where he oversaw policing in Wilmington, Harbor City, Harbor Gateway and San Pedro.

"I am thrilled that Pat Gannon will be the next chief of the Los Angeles Airport Police," Mayor Antonio Villaraigosa said in a statement. "Pat served the Los Angeles Police Department with distinction for 34 years, and supervised over 1,700 employees. He understands policing, understands homeland security, and understands the importance of policing while serving the interests of the community.

"The Los Angeles Airport Police and the LAX community are fortunate to have such a distinguished law enforcement expert to be its next chief."