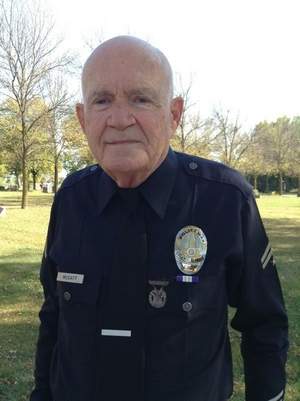 Jan McGaff was 27 when he took a bullet in the chest while on a call for the Los Angeles Police Department in 1972. The wound ended his law enforcement career. He was recently awarded the Purple Heart for law enforcement for his service. (Submitted by Jan McGaff)

A few weeks ago, Jan McGaff slipped into a crisp new police uniform for the first time in more than 40 years.

It fit like a glove. But McGaff, once an officer with the Los Angeles Police Department, wasn't going back to work.

Among close friends, family and old peers, McGaff received the Purple Heart for law enforcement from the Los Angeles Police Foundation, an overdue honor for a nearly fatal injury McGaff suffered in the line of duty, one that prematurely ended his career with the LAPD when he was just 27.

"They put it around your neck on a ribbon," McGaff said of the award that has only been around for a few years.

Though the honor came several decades after McGaff took a gunshot to the chest, he's not complaining.

"I'm glad they waited 41 years because I didn't have any children at the time the accident happened," he said. "That was the proudest moment for me. They got to see their dad and grandfather in a police uniform."

It was 2:30 a.m. McGaff and his partner were getting ready to wrap up their night shift. But his partner had an inkling about some possible illegal activity at a nearby residence

As a member of the undercover plain clothes 77th vice squad, McGaff - a military veteran - often raided gambling, narcotics and prostitution operations in the thick of Los Angeles.

Vice was his expertise.

"Within that unit, it was always scary to go into a narcotics sting because you never knew what you were going to find. One day you might go and everybody is very peaceful and you get everybody out in 15 minutes. And then there were days like when I got shot."

McGaff and his partner crept to the front of the home and peeked into the window.

"We see there's a big gambling operation in the kitchen. In the living room they were shooting up drugs. And they were running prostitutes out the back bedroom," McGaff said.

"They had everything going there." 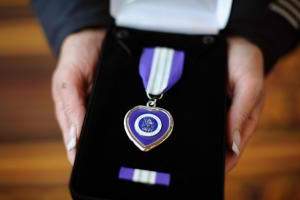 Former LAPD officer Jan McGaff was recently awarded The Purple Heart for law enforcement for a shooting incident that ended his career in the 1970s. (Submitted by Jan McGaff)

The officers identified themselves to the suspects inside and flashed their badges through the front door peephole. They demanded entry into the residence.

What would ensue as the two entered the house and exchanged shots with at least one suspect would leave McGaff lying in a hallway with a bullet wound to his chest.

McGaff's partner made sure he was OK while he phoned for help.

For Beth Cannon, who was married to McGaff at the time, the experience was one she'd dreaded, as any spouse of a police officer would.

"They came to my door at three in the morning. Two uniform policemen with their police car sitting outside," Cannon said.

At the time, the couple lived in Redondo Beach.

"I just kind of knew why they were there. I just knew."

Cannon and McGaff, who were married more than 20 years, have two daughters together and remain close friends.

"He has nine lives. We've always said that," Cannon said.

A year after the incident, McGaff was retired from the police force. Though the LAPD was prepared to recall McGaff after a five-year recovery, he wasn't well enough to serve again.

"After that, I went to work for Playboy," McGaff said with a laugh.

In his late 20s, McGaff became corporate executive in charge of security for Playboy, a job that took him all over the world as one of Hugh Heffner's keepers.

The need for a change of pace brought him to the Coachella Valley two decades ago. He settled in Indio and owned several beauty supply shops throughout the valley, though the businesses eventually folded when the economy went south.

Now, McGaff enjoys the many past times that the desert has to offer, mostly golfing with his friends at places like PGA West in La Quinta and the Bighorn Golf Club in Palm Desert.

For a change of scenery, McGaff travels to his native Minnesota, where he finds himself today, spending time with his grandchildren.