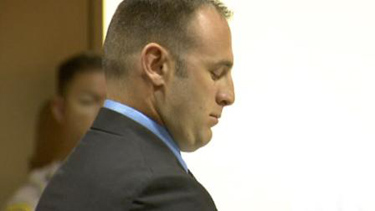 Jeffrey Stenroos, a school police officer accused of making up a story about being shot by a gunman in Woodland Hills, appears in court in this undated photo. (KABC Photo)

Stenroos was taken into custody in court. He was ordered to undergo a psychological examination.

Stenroos is due back in court on December 14 for sentencing.

Stenroos is accused of lying about being shot near El Camino Real High School in the San Fernando Valley.

He allegedly told other officers he had been shot by a car-burglary suspect at El Camino High on January 19 while on patrol.

His false report resulted in a 10-hour area lockdown while more than 550 law enforcement officers conducted a manhunt for the non-existent shooting suspect through an eight-square-mile area in the Valley.

LAUSD Superintendent John Deasy released a statement Monday: "Mr. Stenroos is a disgrace to the Los Angeles School Police Department, and this District. Since he has been found guilty of five of six counts in a court of law, our legal team can proceed more quickly with the required processes needed to end the officer's employment."