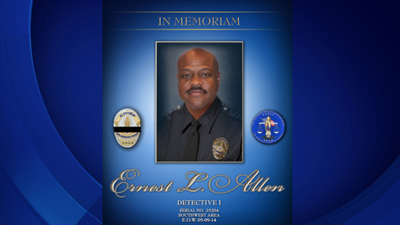 Funeral services were being held Tuesday for a Los Angeles Police Department officer who was killed when his pickup truck was struck by a cement mixer in Beverly Hills.

Allen was killed while he was driving his pickup truck off-duty around 2 p.m. May 9 in the 1000 block of Loma Vista Drive.

The incident was the second time a cement truck overturned on Loma Vista in a week.

LAPD Officer Nicholas Lee, 40, was killed less than a block away on March 7 after the driver of a dump truck lost control and struck his police cruiser.

Following Allen's death, the city of Beverly Hills immediately suspended heavy-equipment vehicles traveling through the area until additional safety measures could be established.

Allen is survived by his mother, two children, two grandchildren, a sister and fiancee, according to the LAPD. Burial will follow funeral services at Inglewood Park.