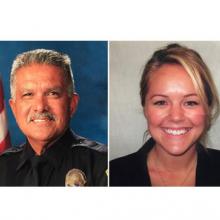 The man accused of killing two Palm Springs police officers in a planned attack last week pleaded not guilty Thursday afternoon after his attorney asked for a psychological evaluation to determine his mental competence.

John Hernandez Felix was shackled and showed little emotion as he sat in an Indio courtroom just 10 feet from more than a dozen Palm Springs officers.

The 26-year-old is charged with two counts of murder, with the special circumstances of multiple murders, murder of a police officer in the line of duty and lying in wait. Felix was ordered to be held without bail.

His attorney, Michael Rowlands, requested a psychological examination to determine whether Felix is mentally competent. A judge will decide whether to grant the defense request and ultimately whether Felix is competent to stand trial.

When announcing the charges this week, Riverside County Dist. Atty. Mike Hestrin said Felix was "prepared" for the Oct. 8 attack that left Officers Lesley Zerebny, 27, and Jose "Gil" Vega, 63, dead. Felix set a trap and ambushed his victims as they stood outside his door, Hestrin said.

"He wanted to gun down police officers because they wore the uniform," Hestrin said. "He was deliberate in his actions. He attacked the officers for no reason other than they were officers coming to a call." 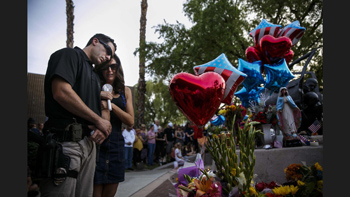 Palm Springs Police Sgt. Kyle Stjerne is embraced by Brooke Stjerne as he mourns the loss of his co-workers during a vigil. (Los Angeles Times)

Felix also has been charged with three counts of attempted murder; authorities say he fired at three other officers, one of whom was wounded and survived. That officer was discharged from the hospital on Sunday and "is doing well," the Palm Springs Police Department said. None of those officers have been identified.

Felix - an admitted gang member who spent 18 months in state prison after being convicted of assault with a deadly weapon in 2010 - was prohibited from owning or possessing firearms because he was a convicted felon, according to the district attorney and police. He has been charged with possession of a stolen AR-15 assault-style rifle that officials say he used in the attack.

Authorities said Felix wore body armor during the shooting and used armor-piercing bullets. The officers were wearing ballistic vests at the time of the attack, according to the Riverside County Sheriff's Department.