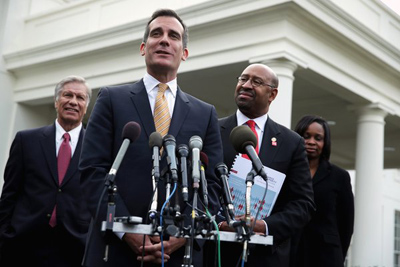 Los Angeles Mayor Eric Garcetti said Monday that he would seek to restore overtime pay in the Los Angeles Police Department, saying it "will be a priority in the coming year."

"I do expect in the next few years to restore overtime, to what level I can't speak to today," he said in a news conference with LAPD Chief Charlie Beck about the LAPD's crime rate.

Garcetti said he also would seek to restore the LAPD to its authorized force of 10,000 officers. The department ended 2013 with 9,909 officers, which the mayor said was "nearly 100 lower than what is acceptable to me."

Garcetti said he and Beck have looked at ways to boost the number of officers, noting personnel officials have already expedited the background process for recruits in order to fill police academy classes.

"I expect this chief and the personnel department to have us at 10,000 at the end of this fiscal year," Garcetti said.

The mayor said he was also exploring ways to boost the starting salaries of LAPD officers, which are significantly lower than some other agencies.

Garcetti said he hoped to balance the salary gap "in the next few years" but cautioned "don't expect that to happen overnight." "We can't afford to do that in a single year," he said.

Fewer people are applying to join the LAPD and, of those who do, a significantly higher number of them are being disqualified from consideration, officials have said.

Officials say budget cuts have slashed the advertising used to draw recruits while other departments are luring top talent with higher salaries than the LAPD offers.

The department needs to hire about 350 officers a year to make up for normal attrition, and officials have said they could remain understaffed for years if the current trend holds.

Although the LAPD has the advantage of a strong reputation, some other agencies pay significantly higher starting salaries. The base starting pay for an LAPD recruit is $48,462.

Budget cuts also have forced the personnel department to do away with nearly all of the billboard advertisements and commercials on radio and television stations that it used to rely on to spread the word that the LAPD was hiring, officials have said.