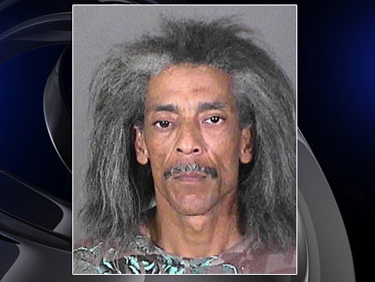 A Southland registered sex offender was in custody Monday on burglary charges after police traced his location using his GPS bracelet.

Wilbert Matheney, 48, was charged in a hot-prowl burglary in Sylmar after the ankle bracelet he wore as a registered sex offender showed he was in the home he claimed never to have entered.

"The fruit of the crime was a laptop, but the whole situation could have been much worse," said Lt. Paul Vernon, commanding officer of the Mission Detective Division. "Matheney entered the home at six o'clock in the evening when two residents, one a woman, were home."

On August 30, the 90-year-old homeowner was relaxing in his living room in the 13400 block of Bradley Avenue in Sylmar when his 48-year-old roommate was confronted by a salt-and-pepper haired black man, who ran from the house with the laptop.

She told officers she recognized the burglar as a man who helped her with an electrical problem a week prior.

Over the next several days, detectives canvased the area and found neighbors who thought the suspect's description matched that of a man who walked a small white dog routinely. Another neighbor pointed detectives to a group home for sex registrants in the 13600 block of Norris Avenue.

When detectives searched the Megan's Law database, they found most of the registrants in the home were required to wear GPS ankle bracelets to track their movement and ensure their compliance with certain restrictions.

From there, police say it wasn't long before they matched the suspect's description to Matheney and then took a look at his whereabouts on the date of the burglary.

"Lo and behold, the GPS tracker put Matheny in the victim's home on the date and at the time of the burglary," Lt. Vernon explained. When detectives went to Norris Avenue on October 4 to arrest Matheney, he opened the door and a little white dog ran outside. "The detectives just looked at each other and smiled," Vernon said.

Matheney was booked for residential burglary with no bail due to his post-conviction conditions and status as a sex registrant.

But some residents said the arrest has shed some much-needed light on the local sex offender population and the freedoms they enjoy in local communities.

"I would feel more comfortable knowing that these people weren't released out into the community again," said resident Priscilla. "There are so many schools in this area."

"Matheney is a testament to the misnomer of so-called non-violent criminals," Lt. Vernon added. "I've seen too often where a career burglary (sic) turned into a rapist or a murderer based upon being confronted or finding a vulnerable woman in the target home. Thank God it wasn't the case this time."