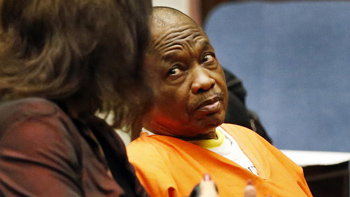 Debra, a waitress, was discovered shot in the chest three decades ago in an alley. The body of 25-year-old Janecia was found in a dumpster in 2007. There were at least eight other women. And one who got away.

They were young and black and leading troubled lives, some working as prostitutes. Most were killed along a corridor in the Manchester Square neighborhood of South Los Angeles.

Police kept the cases quiet - a decision that later led to outrage over what seemed an apparent disregard for the victims as well as the community's safety. The slayings were eventually linked to a serial killer, dubbed the Grim Sleeper.

When affable Lonnie Franklin Jr., a local backyard mechanic, was arrested in 2010, it shocked residents but signaled a key moment in the search for justice for the victims and a region that has often felt marginalized when it comes to solving homicides.

Since then, however, court proceedings were continuously delayed, leading to more frustration. Five years dragged by.

On Tuesday, opening statements in Franklin's capital murder trial are scheduled to begin in a downtown Los Angeles courtroom.

The controversial DNA evidence that helped lead to Franklin's arrest will probably be argued at length between a prosecutor and a defense attorney whose interactions at earlier hearings have been contentious.

In 2008, officials collected DNA data from state prisoners, hoping for a hit on the Grim Sleeper. Nothing turned up. A year later, then-state Atty. Gen. Jerry Brown approved a new technique that allowed officials to check whether a crime suspect's DNA partially matches anyone in the state's offender DNA database.

The "familial search" for the Grim Sleeper came up with a name: Christopher Franklin. Arrested in 2008 and charged with firearm and drug offenses, he had been required to submit his DNA. His father was Lonnie Franklin.

Police focused on the elder Franklin, tailing him to ensure he was a DNA match. Using a discarded pizza crust, a fork, napkin and a drinking glass, and the door handle of his car - detectives collected what they could.

Last year, Franklin's attorneys said that an expert hired by their team had determined that DNA collected from two crime scenes linked to their client matched convicted serial killer Chester Turner. The judge ruled that their expert wasn't qualified to testify. The defense also listed in court papers more than a dozen other men as potential sources of DNA found at crime scenes linked to Franklin.

Franklin faces 10 counts of murder and one of attempted murder, but investigators suspect he is responsible for additional deaths. LAPD detectives had continued to search for victims after Franklin's arrest, publicly releasing photos of unidentified women found inside his home.

After reviewing hundreds of unsolved homicides and missing person reports, they announced in 2011 that they had traced six more killings to Franklin.

By then, the complicated case was moving sluggishly toward trial. In a strategic decision, police decided against seeking additional charges out of fear it would lead to even more delays.

In recent weeks, hundreds of potential jurors - warned that the case may take about three months - were asked their thoughts on DNA analysis and interpretation in questionnaires.

Franklin was in court on the first day of jury selection in December. Superior Court Judge Kathleen Kennedy instructed him to face the jurors that had filed in. The 63-year-old pursed his lips and stared, donning the same hard look he always wears in court.

"As you can imagine, this is a complicated case," Kennedy said.

Upon hearing more details, several women nodded as if they recognized the case. A man mouthed, "Oh, wow."

Kennedy then read aloud the indictment. By the time she got to count 5, one potential juror shook her head and her jaw fell open.