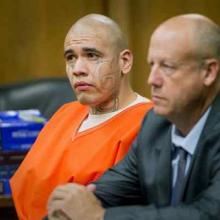 A preliminary hearing for the man police suspect of shooting a Whittier police officer to death in February was continued Monday.

Michael Christopher Mejia appeared in Norwalk Superior Court wearing an orange jumpsuit, as Judge Raul A. Sahagun granted defense attorney Paul Cohen’s request because of his participation in another trial.

Mejia, a known gang member, could face the death penalty if convicted of the murder of Boyer, 53, the murder of his cousin, Torres, 47, and the wounding of Officer Patrick Hazell, as well as the carjacking of his cousin and the alleged weapons violation, authorities said.

The preliminary is now scheduled at 8:30 a.m. on June 22 in department D of Norwalk Superior Court.