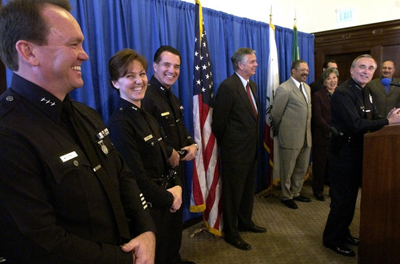 Papa was chosen for the post over Los Angeles County Assistant Sheriff Cecil Rhambo, who at one time oversaw the agency's eight jails and who was endorsed by the town's mayor.

"I went with the candidate that I believe will be the best fit for Hermosa and lead us into the future," Bakaly told The Times. "It was a difficult decision ... but at the end of the day I went with what I thought was best for the community."

Papa previously served seven years as the chief of police for the Los Angeles County Metropolitan Transportation Authority and eight years as an assistant chief at the LAPD, where she managed the agency's budget and was credited with bolstering women and minorities within its ranks.

The 1.3-square-mile town is home to 20,000 residents, but has a lively bar scene and its reputation as a party destination has kept law enforcement officials busy, particularly during the city's Fourth of July festivities, which have been known to be raucous.

An initial round of recruiting, which ended earlier this spring, proved fruitless. The City Council renewed the search in May, increasing the position's annual salary and adding a signing bonus of $20,000 for a two-year commitment. The job pays $163,000 a year.

Last week, city officials revealed that Papa and Rhambo were the top two finalists for the job.

One council member called Bobko's endorsement "inappropriate," but Bobko defended the announcement, saying he felt justified weighing in on an important decision.

"I had a preference. That my preference wasn't the ultimate selection, that's just how things break sometimes," Bobko told The Times. "I have complete faith and confidence in Tom Bakaly's selection ... and I look forward to serving with her."

Bakaly said Papa will now undergo an extensive vetting process and background check, which is expected to last several weeks.

He hopes to have a permanent police chief in place by Oct. 1.