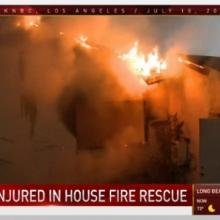 Four Los Angeles Police Department officers were heroes after rescuing a man from a fast moving blaze at a cluttered one-story home in Sylmar on Tuesday night.

The fire was reported at 8:50 p.m. in the 13600 block of Brussels Avenue, according to Brian Humphrey of the Los Angeles Fire Department.

The civilian victim had been reported to be trapped inside the home, but was outside when firefighters arrived after being rescued by four fast thinking heroes that put their own lives in danger to rescue the man.

In all, 41 firefighters responded and knocked down the heavy flames in 26 minutes, Humphrey said.