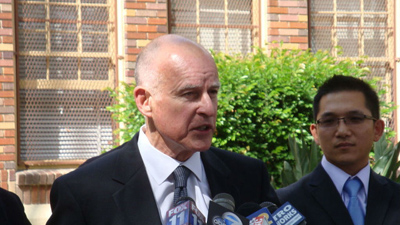 AB 8 calls for "yellow alerts" showing details about a fleeing vehicle - such as color, make, model and license plate number - to be displayed on digital freeway and street signs. Such alerts are already used during kidnappings.

"This will make our streets much more safe, will help a lot of grieving families get justice," he said.

Gatto held a news conference outside Los Angeles City Hall earlier Monday to urge Brown to "do the right thing" and sign the bill, which is set to go into effect on Jan. 1.

Brown vetoed a similar bill last year, explaining to Gatto that he had concerns it would overburden the existing alert system. The governor had until Oct. 11 to decide whether to sign or veto the latest bill.

"I don't think the system is too burdened," Gatto said Monday, noting that freeway signs are being used to urge drivers statewide to conserve water amid an historic drought.

Gatto added his bill is "narrowly tailored" to ensure alerts are only sent out in areas near where the incidents occur and only if the collision resulted in serious injury or death.

She noted a fatal hit-and-run in Highland Park earlier this month. Butler said she was eating dinner with friends in the area when she heard a crash, then saw a driver flee the scene.

The victim, Yolanda Lugo, died about a week later, while "we are still looking for the perpetrator of this crime," Butler said. "The Assembly member is doing his part and now, we just ask the governor, please sign the bill and show all vulnerable users of the streets that the streets also belong to them."

The Los Angeles City Council earlier this year approved standing rewards ranging from $1,000 to $50,000 aimed at generating leads to capture drivers who flee traffic collisions rather than stop to potentially render aid.