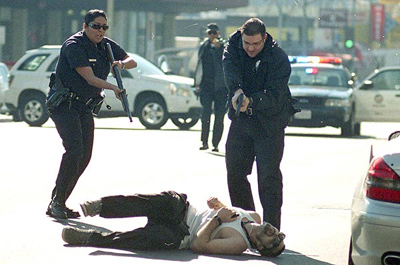 LAPD officers run with guns drawn to the suspected gunman after the shooting spree Friday on Vine Street in Hollywood. (Gregory Bojorquez)

Friends of the gunman who opened fire on a street in Hollywood last week said 26-year-old Tyler Brehm had been acting strangely in recent weeks and appeared to be taking heavy drugs.

Brehm has no history of violence and no criminal record, according to law enforcement sources. He worked at marijuana dispensaries in the Hollywood area. After a breakup with his girlfriend, he was distraught and exhibited signs of depression, said the sources, who spoke on the condition of anonymity because the case was ongoing.

The friends told police Brehm was not a hard drug user but that recently, he had been taking cocaine and acting strangely, the sources told The Times.

"I do not understand now nor will I ever is why such a senseless act of violence was inflicted upon such a GOD-fearing, kind, compassionate, loving individual," Atterberry's sister, Cynthia Atterberry, said in a posting on Facebook after her brother died Monday.

Rob Dates, a friend, told KTLA that John Atterberry was a kind person who always looked out for him. "I went from a negative to a positive thanks to the help of John," Dates said.

"A lot of people are going to miss John. There are a lot of people who John helped," Atterberry's uncle, Johnnie Adams, told the station.

Atterberry's death prompted tributes from people who knew him during his years as a music and promotions executive. The Los Angeles native got his start at Tabu Records, according to a biography on the Facebook page for GridLock Group, where he served as senior partner and chief financial officer. Early in his career he was a vice president of Death Row Records, which at the time was home to Tupac Shakur, Dr. Dre and Snoop Dogg. He later worked on albums by Christina Aguilera, Michael Jackson, Brandy, the Spice Girls and Jessica Simpson.

Atterberry, 40, of Hollywood Hills was driving near the intersection of Sunset Boulevard and Vine Street when he was shot three times in the face and neck by Brehm.

Brehm repeatedly fired a .40-caliber handgun at motorists, police said. Atterberry's silver Mercedes-Benz coupe was one of several cars Brehm shot at from close range. When police arrived, Brehm screamed that he wanted to die and pointed his weapon at the officers, who shot him.