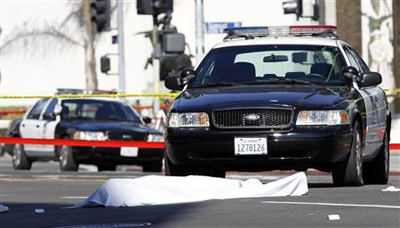 A body is covered by a blanket after a shooting with police in Hollywood, California December 9, 2011. (Reuters/Mario Anzuoni)

The ex-girlfriend of the man who opened fire on a street in Hollywood on Friday said he wanted to "change the world for the better."

Alicia Alligood, 24, said that she and Tyler Brehm, 26, dated for four years before breaking up. In an interview with KTLA News, she described Brehm as "really stressed out lately" and said he'd recently started taking pharmaceutical drugs, which she called surprising because he wasn't one to use hard drugs.

LAPD sources said that at about 10:20 a.m., Brehm began firing a .40-caliber handgun in the air and menacing motorists in a McDonald's parking lot before walking toward the intersection of Sunset Boulevard and Vine Street. Just south of Sunset, he fired several shots at a silver Mercedes-Benz coupe. The driver, music industry executive John Atterberry, was struck by three bullets in the neck and face.

PHOTOS: A deadly scene in a Hollywood intersection

Brehm began walking into the bustling intersection, still firing into the air and at cars. Witnesses described a frenzied scene that to some seemed surreal because they initially thought the shooting was part of a movie being filmed in the area. But once the sound of bullets striking cars filled the air, pedestrians sprinted away, dashing inside businesses and jumping over walls.

Several drivers' car windows were shot out. Others sped off or made U-turns, trying to avoid the gun-wielding Brehm, who wore sunglasses and was dressed in dark pants and a white tank top. An onlooker in a nearby building shouted at Brehm, trying to distract him. Some of the rampage was captured in videos and photos.

The shooting ended after about three minutes, when two LAPD officers, including an off-duty motorcycle officer working on a nearby movie set, confronted Brehm and ordered him to drop his gun.

Alligood said that she and Brehm went to junior high and high school together. She called him a "humanitarian" and said he wanted to "change the world for the better."