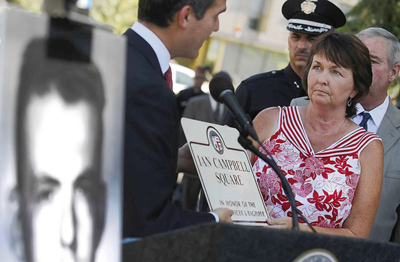 Los Angeles City Councilman Eric Garcetti, left, presents a commemorative plaque to Valerie Campbell-Moniz, right, at the dedication of a Hollywood intersection in honor of her father, LAPD Officer Ian Campbell, who was murdered in a Kern County onion field in 1963. The case was the basis for a bestselling book by Joseph Wambaugh. Campbell-Moniz was 3 at the time of her father's death. (Brian van der Brug / Los Angeles times / August 11, 2012)

LAPD Officer Ian Campbell's last breaths were in the dirt of a Kern County onion field. It was March 9, 1963, and he and his partner, Karl Hettinger, had been driven to the area at gunpoint. Hettinger managed to escape but Campbell was shot and killed, and his death was chronicled by author Joseph Wambaugh in his classic "The Onion Field" and a later film.

Campbell's name will now be memorialized in the neighborhood that he patrolled, said L.A. city officials who on Friday dedicated a Hollywood intersection to the slain officer. A new sign that reads "Ian Campbell Square" has been installed at Gower Street and Carlos Avenue.

"Someone's going to Google that name right here, right now and find out who Ian Campbell was and what his sacrifice was," said City Councilman Tom LaBonge, who with Councilman Eric Garcetti proposed the motion for the sign.

Campbell's daughter, Valerie Campbell-Moniz, drove down from El Dorado County to witness the unveiling. Only 3 years old when she lost her father, she has spent her life following the fates of the killers.

"It's nice after all these years in dealing with parole hearings to have a happy, honorable event, because this never goes away," she said.

At the intersection nearly 50 years ago, Campbell and Hettinger pulled over a sedan that matched the description of a vehicle used in some burglaries. It was a Saturday evening. When they approached the suspects in the car, one got out, pointed a revolver and ordered both officers to hand over their guns and get in the car.

When Campbell was shot, Hettinger fled, running four miles until he met a farmworker on a tractor. Embarrassed and suffering from depression, he left the department and died of an illness in 1994.

Gregory Powell and Jimmy Lee Smith were both convicted and sentenced to death. The case was overturned and tried four years later, and both were convicted again. Smith was paroled but continued to have run-ins with the law. He died in 2007 while imprisoned for a parole violation.

The idea for the homage began last year near the time when Powell, who has prostate cancer, was denied a compassionate release from prison.

"We thought it would be appropriate to refocus the attention on Ian Campbell," said Glynn Martin of the Los Angeles Police Museum.

The tale of Campbell and Hettinger is taught to every recruit. The slaying revealed vulnerabilities in the department. New strategies were implemented, including how officers approach vehicles, position themselves, communicate and keep control of their own guns. It's not uncommon for a veteran officer to drive a rookie to the intersection where Campbell and Hettinger were kidnapped.

"It wasn't just a change for LAPD; I think it was an awakening for all law enforcement," Martin said.

"Whenever you hear 'never give up your gun,' you think of 'The Onion Field,'" said Det. Scott Walton, who has been with the LAPD for 24 years. He's a member of the department's bagpipe ensemble, an example of another change that came with the five-decades-old murder. Campbell, who died at 31, had played the pipes since childhood. Bagpipes were played at his funeral, and the LAPD has continued to do so for every fallen officer.

"The wild insistent pipes and the marching feet defiantly answer that there is no more death," Ellroy said. "Ian, rest in peace."