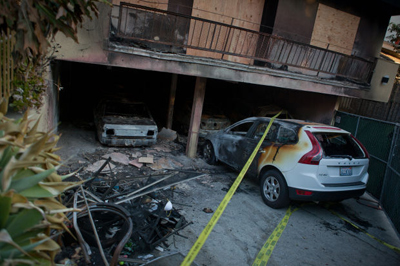 Fencing and police tape cordoned off the remnants of a car fire near the intersection of Sunset Boulevard and Fuller Avenue in Hollywood. (Grant Slater/KPCC)

A Hollywood man has been arrested in connection with the weekend spree of 53 fires from West Hollywood to the San Fernando Valley.

At a press conference, law enforcement released the name of the suspect arrested in the spree: Harry Burkhart, 24. He has been booked downtown and is being held in lieu of $250,000 bail.

Los Angeles Police Department Chief Charlie Beck reminded reporters and the public the arrest is not the end of the investigation.

"An arrest is not a prosecution and a prosecution is not a conviction," Beck said. "We are very confident in this arrest, but we have a long way to go."

The statement echoed comments he made to reporters earlier in the day.

"I feel very good that we've got the right guy," Beck said. "[The arson suspect] had the right stuff in his van, and we are very confident we found our man."

Law enforcement officials praised the coordination of Arson Watch L.A. - a joint task force, which consisted of the Sheriff's Department, LAPD, Los Angeles Fire Department, L.A. County Fire Department and the ATF. The task force set up a Facebook and Twitter account to work with media and the public on the arsons.

Despite the fact that Burkhart drove a van with Canadian license plates, several news outlets are claiming that he is a German national who may have had a beef with the U.S. after a family member was deported.

During a news conference at noon Monday, officials explained how at 3 a.m. earlier that morning, a reserve deputy pulled over a man driving a van on Fairfax Avenue in West Hollywood. Both the man and the van fit descriptions given to them by tipsters.

Firefighters have not responded to any other suspicious fires since the suspect was arrested, L.A. fire Capt. Jamie Moore said.

The mayhem caused about $2 million in damage, Moore estimated, but there were no serious injuries. One firefighter was hurt, and a senior citizen suffered smoke inhalation, he said.

Even though Sheriff Lee Baca said residents can resume the peace and safety they deserve," vigilance was still important.

"Keep vigilant," said Daryl Osby, L.A. County fire chief. "Keep your guard up. If you notice any, any suspicious activity or anything out of the ordinary, do not hesitate to dial 911."