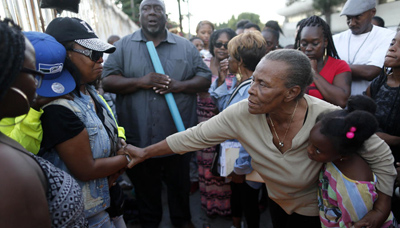 Family and friends gather for a vigil for 16-year-old Elijah Galbreath, who was gunned down Sunday afternoon in Watts. (Michael Robinson Chavez / Los Angeles Times)

After a "very, very tough weekend" where 19 people were shot across Los Angeles, LAPD Chief Charlie Beck said Tuesday that homicides were now up nearly 11% so far this year.

The majority of the weekend's shootings were gang-related, Beck told the Police Commission at the board's weekly meeting. Gang-related crime was up about 15.6% so far this year compared with 2014, Beck said.

After the meeting, Beck told reporters that the city had the right strategies in place to curb gang violence: a mix of intervention and prevention efforts, youth outreach and officers focused on gang suppression. But he also called on the community to say "enough is enough."

"This is not Dodge City," Beck said. "And unfortunately it looked a little too much like Dodge City this weekend."

The weekend violence comes on the heels of a particularly bloody summer. August was the deadliest month in L.A. in six years, with 39 people killed. In response, the LAPD deployed additional officers into the hardest-hit neighborhoods and reached out to residents, asking for their help.

Four killings this weekend occurred within a 24-hour period in the LAPD's South Bureau, which covers South Los Angeles.

At about 5 p.m. Saturday, police said they were called to the 10300 block of Wilmington Avenue in Watts in response to a domestic disturbance that left a 37-year-old woman dead. Her boyfriend, Deandre Stewart, 36, has been booked on suspicion of voluntary manslaughter.

About 5 a.m. on Sunday, a 30-year-old man was fatally shot at a Jack-in-the-Box in the 2500 block of South Vermont Avenue, just south of the 10 Freeway, police said.

Six hours later, a 35-year-old man was sitting on a milk crate in the Nickerson Gardens housing project in Watts when police say two men approached him, shot him, then ran to a car waiting nearby.

About three hours later, at 2 p.m, a 16-year-old was walking in the 1900 block of East 103rd Street in Watts when a person approached him in a light-colored vehicle, got out of the car and opened fire, police said. The gunman ran back to the vehicle and drove off heading east.

The teenager later died at a hospital.

Those killings began less than 24 hours after Beck joined Mayor Eric Garcetti at City Hall for an emotional news conference with people who have lost loved ones to violence. Also attending was the mother of a 13-year-old boy who was shot and wounded last week near a South L.A. taco stand.

Garcetti defended the city's crime-fighting strategies, which involves deploying hundreds of additional elite police officers into troubled neighborhoods and increasing funding for gang-intervention programs. The mayor said he was confident those efforts had prevented an even sharper rise in violence.

"These are sound strategies," he said. "We know they work. They're just starting to come into play. And I will never assess that they are not working because crime might still be going up. I'm confident that it would be going up more without them."

"Strategies for turning around crime, one way or another, don't happen in a period of weeks," he said.