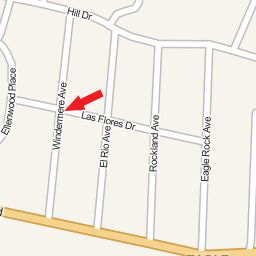 The time was around 11:45 a.m. and Los Angeles Police Department Officer Perry Scheerer was listening to the police radio at his desk in the Crime Analysis Detail of the Northeast Community Station last Tuesday.

Suddenly, a message on the radio caught his attention. Amid calls about a possible vehicle burglary suspect at the Costco shopping center in Atwater Village and a lot of other chatter, Scheerer heard someone from the LAPD air unit utter the words "Las Flores" and, moments later, "El Rio."

Immediately, the officer knew something fishy was going on in Eagle Rock. And he was ready to use the power of social media to put word out about a possible crime underway.

It turned out that a resident on Windermere Avenue and Las Flores Drive had called 911 after spotting a man lurking on the outskirts of his neighbor's yard and peering into the house.

Within a minute, an LAPD helicopter was overhead. "The guy got spooked and jumped on a bicycle and began riding eastbound on Las Flores," Scheerer told Patch, recounting the fast-paced incident. "He came south on Rockland Avenue, past Colorado Boulevard when our ground units caught up with him around Maywood Avenue."

As soon as the suspect was taken into custody, Scheerer, who is part of the Northeast Station's three-member social media team, sent a message from the Northeast Area LAPD Twitter account. The 132-character tweet, including spaces, read:

From the time the helicopter arrived, leading to the suspect's detention, and Scheerer informed the Northeast station's 1,851 Twitter followers about it, was all of five minutes.

Could the LAPD's social media expert have acted faster still?

Certainly-but not without violating a certain protocol.

"When I hear a hot shot call-it could be a shooting or a felony crime like a burglary-I don't tweet anything until officers are on the scene because I don't want the public to get there before we do and get in the way or become part of the problem," Scheerer explained.

In Tuesday's incident, Scheerer waited until the suspect pedaled five or six blocks, with the police helicopter overhead. Once patrol officers intercepted and detained the suspect, Scheerer sent his tweet.

Detectives conducted a preliminary investigation and tried to find out if an actual crime had been committed. It turned out that nobody was inside the home that the suspect had been casing, Scheerer said.

"We couldn't definitely say that he was pulling on a door handle or trying to force entry," Scheerer said, adding that the neighbor who called 911 did not want to meet in person with police officers, although he followed the suspect's trail in a car. "He called from a cell phone and said that the officers had the correct person in custody, but then refused to meet," Scheerer said.

The suspect was detained, identified and released. "He wasn't from the area and we think he was riding through and stopped in a nice, little residential area in North Eagle Rock, looking into houses," said Scheerer. "That's not normal behavior. We think he was probably casing homes and the witness interrupted the activity."

It was a case of "preparatory activity toward a crime," explained Scheerer. "That's great-if we can catch a suspect when a crime hasn't been committed, then we're really protecting and serving the community."

The officer added: "We love it when the neighbors get involved and the community's looking out for each other-a Neighborhood Watch type of thing."