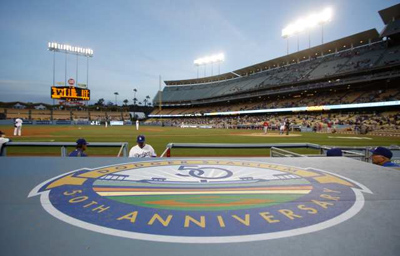 A dugout is adorned with a Dodger Stadium 50th anniversary logo. (Associated Press)

Los Angeles police officers will deploy in larger than normal numbers for Tuesday's opening day at Dodger Stadium, with a focus on fans who have arrive early to drink in the team's parking lot.

Officers and the team have been working "for many months to create a plan to ensure a peaceful opening day," the LAPD said in a statement. The game is sold out.

The department's statement reminds fans that drinking "in public parks is illegal" and will be the focus of increased patrols on opening day "because it frequently leads to altercations, rowdy behavior and other unsafe activities."

Last year's opening game, as well as the entire season, was marred by the attack on Bryan Stow, a paramedic and San Francisco Giants fan from the Bay Area who attended the game in Giants' garb. Stow was critically injured in the attack, and his attorneys, in a lawsuit against the team, say he will need lifelong medical care costing at least $50 million.

Two Rialto men, Louie Sanchez and Marvin Norwood, have been charged in the attack.

In a statement, the team declined to discuss specifics of the security measures it had put in place for opening day, but said: "Security is a paramount priority of the Los Angeles Dodgers."

On Thursday, the team held a viewing party at Dodger Stadium for its first game of the year, which took place in San Diego. Some 6,000 people attended, a team official said.

Tuesday's game will feature a ceremony to introduce members of the Dodgers who played the first game at the stadium, on April 10, 1962, including the MVP that year, Maury Wills, and that year's National League batting champion, Tommy Davis.

The Beach Boys will sing the National Anthem. The first pitch will be thrown out by Terry Seidler, daughter of Kay and Walter O'Malley, who owned the team and moved it from Brooklyn, N.Y., to Los Angeles.