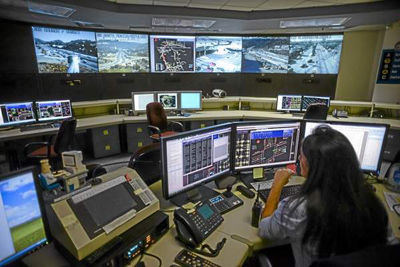 Abeer Kliefe, a Transportation Engineer Associate works the nerve center at the Automated Traffic Surveillance and Control Center of the City of Los Angeles Tuesday, February 11, 2014. The LADOT is gearing up for "Jamzilla" February 14-18th when the Sepulveda pass will be closed for further road work. (David Crane - Staff photographer)

A monster traffic jam could snarl traffic over Presidents Day weekend when the 405 Freeway shuts down as part of the ongoing construction of the freeway's new car-pool lane.

The 80-hour closure, dubbed "Jamzilla," will close three lanes on the northbound 405 Freeway during the day and five lanes at night. Transportation officials are comparing the shutdown to "Carmaggedon" - the total, three-day shutdown of the roadway - and they are asking drivers to avoid the area.

"We want the public to stay off the freeway if at all possible," said Dave Sotero, Metropolitan Transportation Authority spokesman. "There may be a little complacency because they think we're crying wolf at this point, but we're not."

The 80-hour "Jamzilla" operation will kick off at 11 p.m. Friday and conclude about 6 a.m. Tuesday, officials said.

During the daytime, only two northbound lanes from Getty Center Drive to Ventura Boulevard will be open. During nighttime hours, all five northbound freeway lanes in the same 5.6-mile stretch will be closed.

The closure will allow for paving on the 405 Freeway widening project. The $1 billion project will add a car-pool lane on the northbound side between the 10 and 101 freeways. It is expected to open later this year, Sotero said.

This weekend's Jamzilla closure will be canceled if the weather turns bad, Sotero said. Construction crews can't work in the rain, so if there is a chance of precipitation, the job will be postponed.

Officials will announce today if Jamzilla is being canceled, Sotero said.

If the closure goes forward, about 35 traffic officers will be placed around the city to observe traffic during the 80-hour closure, said Edward Yu, city transportation engineer.

The ATSAC, located four floors below City Hall's East building in downtown, has dozens of screens and monitors showing local traffic conditions. A total of 400 cameras and 40,000 street sensors are placed around the city, and feed traffic information to the ATSAC center.

Yu predicted traffic would be distributed throughout the city during Jamzilla.

"You may get more traffic around the I-10 or other routes ... you may get traffic on city streets," Yu said.

Jamzilla comes amid two other high-profile events expected to impact traffic this weekend. On Saturday afternoon, there is a ceremonial "concrete pour" for the under-construction Wilshire Grand hotel, which is expected to snarl traffic in downtown.

Also, some employees, particularly government workers, have a three-day weekend as a result of the Presidents Day holiday.