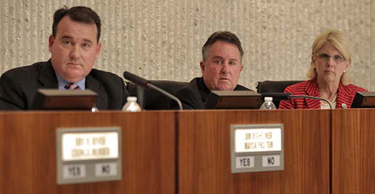 In a preliminary injunction barring the city from implementing its outsourcing plans, Judge Tam Nomoto Schumann said Costa Mesa must follow necessary steps if it plans to replace 213 employees primarily with private workers. The city issued the layoff notices in March.

City officials, meanwhile, said they believed they were in compliance with the law and should be able to execute their austerity measures.

"We are following the proper procedures," City Atty. Tom Duarte said in a statement. "This ruling doesn't affect the city's ability to research outsourcing possibilities and, if it's prudent, to outsource city jobs down the road."

A majority of the workers affected are part of the Costa Mesa City Employees Assn., which is represented by the larger Orange County Employees Assn. The jobs on the chopping block - including animal control, bookkeeping and jail services positions - are not "special services" that Costa Mesa has legal authority to contract out to private companies, the larger association's attorneys argued.

The group also argued that the city did not meet with employee groups before issuing the notices, as required in city contracts. Schumann made a note of that as well.

Harold Potter of Jones & Mayer, the law firm representing Costa Mesa, seemed at a loss in court with Schumann's ruling and offered little reaction outside the courtroom. He waved his arms in wide circles from behind the defendant's bench, telling Schumann that she was barring Costa Mesa from finding solutions to its perceived budget problems.

"The restraining order restrains the city from thinking of outsourcing jobs," Potter said. "There is no harm or immediate harm that couldn't be undone. It's a let's-wait-and-see type of proposal."

"I don't think the plaintiff is here because the city is exploring other fiscally sound policies in a tough economy," Schumann dryly replied.

"You're enjoining the city from doing what?" Potter asked.

"Laying off the employees without following proper procedures," she answered.

Neither the judge nor attorneys in court Tuesday clarified what those procedures are. Costa Mesa will have to follow them if it wants to unload city workers and some of its pension obligations.

The hold is in place until the union's lawsuit goes to trial, employee association attorneys said. It is unlikely that the case would go to trial before Sept. 30, when the layoffs would begin. That means that at least for the time being, workers can count on having their jobs beyond the layoff deadline.

Costa Mesa can continue to send out requests for proposals to seek bids for city work. In a news release issued after the ruling, city officials said that if Costa Mesa finds a suitable outside company, meets with the union and follows the law, it can still lay off workers.