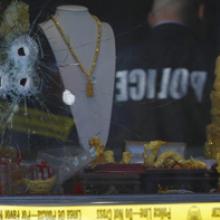 Police investigate the shooting of a security guard at a jewelry store in downtown L.A.'s Chinatown earlier this year. Paramedics treated the man for an arm wound, according to reports from the scene. (Francine Orr / Los Angeles Times)
Kate Mather
LA Times

Killings in Los Angeles have surged by 27.5% so far in 2016 compared to the same period last year as the city continued to see a rise in violent crime, LAPD officials said Tuesday.

The jump in homicides along with double-digit increases in aggravated assaults and robberies meant Los Angeles has experienced a 12.7% rise in violent offenses, LAPD Asst. Chief Earl Paysinger told police commissioners at their weekly meeting Tuesday.

In contrast, property crime has fallen 2%, fueled largely by what Paysinger described as a "remarkable" 16.2% drop in burglaries. As a result, overall crime is up less than a percentage point from 2015, Paysinger said.

The LAPD's Central Bureau has seen the largest crime increase at 4.5%. The South Bureau, which covers South L.A., has seen a 3% jump. The two remaining bureaus, which cover West L.A. and the San Fernando Valley, have seen crime decrease compared with the same period last year.

In his weekly report to the Police Commission, LAPD Chief Charlie Beck has cautioned that crime numbers can fluctuate dramatically early in the year, when the department compares only a few weeks of numbers to previous years.

But police continue to grapple with some of the same factors that have driven crime in recent months, particularly violent offenses such as homicides and shootings. Beck noted last week that 10 of a dozen shootings reported over the prior weekend were considered gang-related.

More than half of the city's 48 homicides recorded at that point were also believed to be related to gang activity, he said.

Deputy Chief Bill Scott, who oversees the LAPD's South Bureau, said the increase in killings has been most obvious in the department's Southwest Division, which includes neighborhoods such as Baldwin Hills, Leimert Park and Exposition Park.

Last year, the division didn't see a homicide until March, Scott said. This year, seven people have been killed. Four of those homicides are considered gang-related, he said.

Police are responding in several ways, Scott said, including "staple strategies" such as sending officers to potential crime hot spots and conducting more parole or probation checks. But, he said, police are also looking toward long-term strategies to reduce gang violence.

To drive property crimes down, Scott said police focus on suspects linked to a list of offenses. Many offenders who commit such crimes often strike more than once, he said, so arresting one person can have a significant effect on overall crime in a neighborhood.See the most-read stories this hour >>

"That's what we try to do -- try to identify those types of people," he said. "We have to focus on violent crime because that's the most serious, but they're all important."

Scott acknowledged that crime numbers can fluctuate at the start of a year, but said he believes police "have to keep that sense of urgency."

"When we start out in a hole, it sets the tone for what's going to come," he said. "We want to start off the year on a good tone."