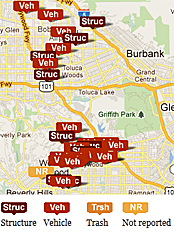 The mother of the suspect in a string of arson fires in Los Angeles was arrested last week at the request of the German government.

Dorothee Burkhart in is federal custody in Los Angeles after Germany requested she be detained on an arrest warrant, said Thom Mrozek, a spokesman for the U.S. attorney's office.

He said he could not disclose the nature of the alleged crime because the case was sealed. The arrest occurred just before the arson spree began.

Dorothee Burkhart is due in court Tuesday afternoon.

Her son, Harry Burkhart, 24, was booked on arson charges on Monday. He is a German national who carried travel papers from Chechnya, police say, but has lived in Southern California for the last several years.

Authorities are not clear on his motives but speculated that he might have been angry about his mother's pending deportation.

A senior LAPD official said the suspect had attended a recent immigration hearing regarding his mother's case and erupted in a tirade, spewing angry anti-American statements.

It was this incident that eventually led police to Burkhart. Several sources said the tip came from an official at the State Department. Mayor Antonio Villaraigosa on Monday also thanked the U.S. Marshals Service for helping identify Burkhart.

TV footage showed Burkhart after his arrest, dressed in black, wearing his hair in a ponytail and grinning.

Since Friday morning, at least 50 fires were set, mostly in the Hollywood area, but also on the Westside and in the San Fernando Valley. Many of the blazes were in carports and driveways, and spread to apartment buildings and homes.

Los Angeles police said they have strong evidence tying Burkhart to the arson spree -- including fire-starting materials found inside his minivan during his arrest Monday.

But officials have stressed that the investigation is still ongoing. Los Angeles Police Chief Charlie Beck said the department was moving cautiously and that it was unclear when exactly their case would be presented to prosecutors.

"We are confident in our investigation, but we have a long way to go," he said.

In an interview with The Times, he added: "I feel very good that we've got the right guy. He had the right stuff in his van and I am confident in the arrest."