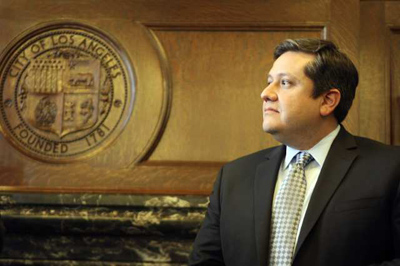 L.A.'s top budget official warned Tuesday that the city can no longer afford to pay raises that are due to roughly 20,000 of its workers July 1, according to correspondence obtained by The Times.

City Administrative Officer Miguel Santana sent a letter to members of the Coalition of L.A. City Unions calling for the reopening of contract talks, saying negotiations will be needed to confront a $220 million budget shortfall that looms in the fiscal year starting July 1.

In his letter, Santana said raises for the coalition's members will cost the city $105 million over the next two years. And he warned that there could be dire consequences if the raises are awarded.

"Funding of these salary increases in fiscal year 2012-13 alone may require laying off 200 to 250 full-time general fund employees, particularly since furloughs are not an option," wrote Santana, who said he was acting on the instructions of the city's negotiating committee, which is made up of Mayor Antonio Villaraigosa and four council members.

Villaraigosa is scheduled to unveil his annual budget next month. Santana would not comment on his letter, saying he was in the middle of personnel negotiations. But in the letter, he said labor costs are increasing at a much faster rate than new revenue.

Santana's letter disappointed David Sanders, regional director for the cities division of Service Employees International Union Local 721, which belongs to the union coalition. Sanders said the coalition had saved hundreds of millions of dollars by making concessions, reducing the size of the workforce and paying more for retirement benefits.

"In no way whatsoever would we agree to reopen the contract," said Sanders. "We went through this process with Miguel, and we negotiated in good faith. For him to renege on that, it lacks integrity on his part."

The coalition represents such employees as sanitation workers, custodians, librarians and park maintenance employees. Its members are scheduled to see their salaries increase by 3.75% starting July 1. Of that total, 2.25% will be a raise. Another 1.5% comes from no longer having to give up four work days, a concession coalition members agreed to do last year.

Villaraigosa and the council originally promised the coalition a package of raises in 2007. When the national economy melted down two years later, labor unions agreed to postpone those increases in an attempt to stave off layoffs. That same year, the city provided early retirement to 2,400 workers -- a program that proved to be so expensive that taxpayers will be covering the cost until 2024.

Last year, the coalition's members agreed to push back their package of pay increases a second time while contributing more toward their healthcare.

On Tuesday, however, Santana said in his letter that the city will need "structural reform" of employee salaries and benefits. He sent union officials a chart indicating that pay raises will cost $184 million across the city next year. That figure is expected to grow to $280 million in 2013-14, the first year after Villaraigosa has left office after completing his second and final term.