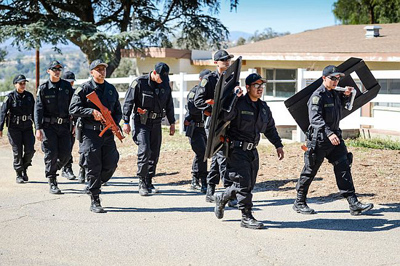 Explorers from Bell move in to take part in a felony arrest drill at Pitchess Detention Center on Sunday, March 24, 2013. Law enforcement explorer posts participated in a weekend-long competition to sharpen their skills. (David Crane/Staff Photographer)

Their mission to protect and to serve began the moment they arrived within the verdant canyons of Castaic on Sunday.

Once there, they raided marijuana fields, pulled domestic violence victims from danger and rescued a fallen fellow officer, all before noon.

Though these were just tactical scenarios, the hundreds of teenagers and young men and women who participated in Sunday's 2nd annual North County Law Enforcement Explorer competition received the opportunity to learn the skills needed to save a life, solve a crime and protect the public as well as themselves.

"We're exposing the young men and women to a police environment because we want them to see what we deal with on a daily basis," Short said.

A lot of the events are individual contests, but many of the competitions were designed to help the explorers work as a team, Short added.

Explorer programs were created within police agencies to motivate youth 14 to 21 years old interested in the law enforcement field or in serving the public. After training, explorers participate in community events and non-hazardous law enforcement activities.

Sunday's competition drew 16 explorer teams with more than 300 members from as far as Arizona and Nevada, and across Southern California including Bell, Montebello, Long Beach and Orange County.

In addition to the tactical scenarios, the explorers competed in a rock wall climb, a mud run and 5k race. The two-day competition was sponsored by the Palmdale, Lancaster and Santa Clarita Sheriff's Explorer Posts. Volunteers within the community and law enforcement helped run the event, which is affiliated with the Boy Scouts of America (BSA), Learning for Life program.

Some of the explorers who participated said the tactical scenarios showed the raw reality of law enforcement.

Anthony Hart, 20, has been an explorer for six years. He said some of the scenarios came close to reminding him of some of the real events that have occurred in the last few months, such as the shooting at Sandy Hook Elementary School in Connecticut late last year. 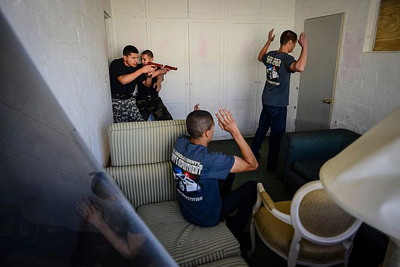 "We were put in a shoot don't shoot situation, and that reminded me of some of the events we've seen," he said.

Natalie Barban, 16, of Orange County, said she learned that there was still much training ahead if she were to pursue a career in law enforcement.

"The training we received still didn't prepare us for what we need to learn," she said. "It's all about quick thinking."

Cody Carpenter, 17, of south Orange County said he joined the explorers because he wants to be like his dad, who is in law enforcement.

But his family and those of the other explorers have expressed concern for their sons and daughters, especially after last month. That's when Christopher Dorner, the ex-LAPD police officer and former United States Navy reservist launched shooting attacks on police officers and their families that left four people dead, including two police officers. Dorner died in a cabin in the San Bernardino Mountains during a stand-off with police.

"It's hard for my mom to accept me going into law enforcement because of what happened to her first husband," Cody said.

Her husband was Howard E. Dallies Jr., a Garden Grove patrol officer who was shot to death in 1993, by a motorcyclist during a traffic stop. He was 36.

But for the young explorers, what they have learned so far has given them what they see as an edge over others their age.

"It's made us more mature," said Brittany Douglass, 20. "We've learned dedication and responsibility."