Skip to main content
11
Nov 2011
L.A. County jails may be out of room next month 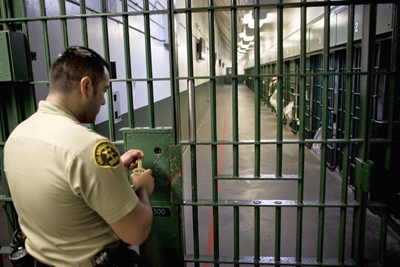 Los Angeles County's jails could run out of space as early as next month because of an influx of state prisoners, prompting officials to consider releasing potentially thousands of inmates awaiting trial.

The state's new prison law, which establishes a practice known as realignment, is expected to send as many as 8,000 offenders who would normally go to state prisons into the L.A. County Jail system in the next year.

Currently, defendants awaiting trial account for 70% of the jail population, but Sheriff Lee Baca said that might need to drop to 50%. The department is studying a major expansion of its electronic monitoring and home detention programs to keep track of inmates who are released.

Baca said the department is also developing a new risk-assessment system designed to better identify which inmates are the best candidates to leave the jails.

Additionally, the department is looking at ways to channel more offenders into education and substance abuse programs rather than jail.

An internal report produced by the L.A. County district attorney's office and obtained by The Times estimated that the county jails would be full by the end of the year. The Sheriff's Department has the funding to open only an additional 1,800 beds, far below the number needed to accommodate the tide of state prisoners coming its way, the report said.

The realignment plan, developed to comply with a U.S. Supreme Court decision on overcrowding in the state prison system, has generated dire warnings from local police and prosecutors who fear the shift will place more offenders on the streets and increase crime. Los Angeles Police Chief Charlie Beck has predicted that the city could see a 3% increase in crime because of realignment.

There is special concern about releasing more defendants before trial, with prosecutors fearing that some might not show up in court. Dist. Atty. Steve Cooley said he also worries that inmates on electronic monitors could intimidate witnesses or take other actions to disrupt their trials.

Conrad Murray faces up to four years in prison. But under the realignment law, he would spend that sentence in a county jail rather than a state prison. That's because under the law, involuntary manslaughter as well as crimes such as drug offenses and identity theft no longer require state prison time.

Cooley said that if the County Jail system reaches capacity, Murray could be a candidate for early release.

"There is going to be a tremendous number of people that should be in jail and will not be incarcerated," he said. "This is the kind of story that will play out over and over again."

Baca declined to comment specifically on what will happen to Murray. But he said the doctor's case shows the decisions his department will probably be forced to make as officials determine which inmates can be released.

"Let's face it, Dr. Murray, for quite a period of time, was out free before he was convicted," Baca said. "The chances of him being a problem behaviorally or a threat to society is nonexistent. He's not probably going to practice medicine again or prescribe medication."

Early release of inmates from the County Jail system has been a reality for years.

The jails are under a federal court order to prevent overcrowding, forcing the Sheriff's Department to release inmates before they serve their full sentences. The extent of early release has fluctuated over time, depending on funding issues and the size of the jail population.

Between 2002 and 2006, more than 150,000 inmates walked free after serving a fraction of their sentences - many of them less than 10%. A 2006 Times investigation found that almost 16,000 inmates released early were rearrested while they were supposed to still be in jail. Sixteen were charged with murder.

More recently, sheriff's officials said they've reduced the number of early releases. But as the cases of Paris Hilton and Lindsay Lohan have shown, low-risk offenders still often serve a small fraction of their sentences. Lohan was sentenced to 30 days in jail, but ended up serving only five hours this week.

The Sheriff's Department has hired a consultant to study, in conjunction with the American Civil Liberties Union, ways of better determining which inmates awaiting trial could be safely released from jail.

Baca said he knows that the prospect of early releases is generating fear and frustration. But given the state law, the sheriff said he is focusing how to handle realignment in the safest and most judicious way.

"I make do with what I can, and I've tried to be creative," Baca said.

Prosecutors, however, are wary of the changes.

The "bottom line is that there is no more room at the inn," Cooley said.