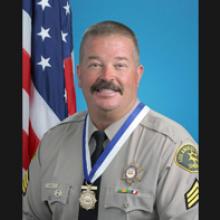 A Los Angeles County sheriff's sergeant was shot and killed in Lancaster on Wednesday while responding to a residential burglary call, setting off a manhunt for a gunman who tried to flee in the slain lawman's cruiser and held two teenagers hostage before he was captured, authorities said.

Sheriff's officials identified the victim as Steve Owen, a 29-year department veteran who had previously won the agency's highest honor for courage. He was the first sheriff's deputy fatally shot while on duty in more than a decade.

"This has been a very dark day for the Sheriff's Department," Capt. Steve Katz said. "We are all suffering right now."

The shooting occurred shortly after noon as Owen, 53, and another deputy responded to a 911 call from a woman reporting a burglary at an apartment building in the 3200 block of West Avenue J-7, authorities said.

As Owen checked the rear of the apartment building, a gunman appeared and shot him.

Owen's partner, who was at the front of the building, ran to the sound of the gunfire and found the wounded sergeant.

The gunman, meanwhile, ran to the front of the apartments and jumped into Owen's patrol car. The deputy returned from the back of the building and opened fire at the stolen cruiser. The gunman threw the car into reverse and rammed a second patrol car, which struck the deputy and injured him, authorities said.

After the collision, the gunman jumped out of the cruiser and fled. He ran into a nearby home where two teenagers were inside. One teen was able to send a text message to alert authorities, Katz said.

Shortly after 2 p.m., sheriff's SWAT deputies forced their way into the home and the man fled through the back, where he hopped a wall, Capt. Jack Ewell said.

Jamie Forsher, 35, was standing in the sunroom of her parents' Lancaster home when she saw a man jump over a fence into their backyard. Forsher knew about the manhunt - deputies had searched the house earlier in the day, and her family was watching the news unfold on television in another room.

The man ran toward the back door. So did Forsher.

"I slammed it and locked it and told everybody to get on the ground," she said. "God forbid he starts shooting and tries to get in here."

Forsher said deputies had swarmed the neighborhood and "got him within a matter of seconds." Television footage showed the man sprawled next to the family's backyard pool as he surrendered.

"My heart really goes out to the officer who was shot and his family," Forsher said.

The suspect, who was taken into custody, was struck in the upper torso by gunfire at some point during the incident, Katz said. Authorities did not name him, but said he is a 27-year-old resident of the Antelope Valley and is on active parole. A weapon was recovered, though authorities did not give a description.

Owen's wife, who is a member of the department's Arson Explosive Unit, along with other family members, managed to reach Antelope Valley Hospital shortly before he died, said sheriff's Executive Officer Neal Tyler.

Lancaster Mayor R. Rex Parris, who was at the hospital, said the lawman was shot in the face.

"We forget how dangerous this job is. Steve was so brave," Parris said. "The Antelope Valley has lost a true hero today."

Late Wednesday, dozens of deputies and local police stood in full uniform as Owen's body was taken from the hospital on a flag-draped gurney. Family members and fellow officers followed, many of them sobbing openly.

A motorcade led by sheriff's deputies and the California Highway Patrol escorted the coroner's van from Lancaster to the morgue near downtown Los Angeles.

Along the 14 Freeway into the San Fernando Valley, law enforcement cars stopped on overpasses and flashed sirens to honor Owen.

Before the procession, Owen's body was placed in a hospital conference room where his wife, children and fellow deputies could pay their respects, according to a hospital spokeswoman.

In the parking lot outside the hospital where Owen died, deputies in bomb squad gear and regular uniforms hugged each other.

One woman walked away down a sidewalk, her eyes red from crying, as others held onto one another. A group of deputies standing in line near the hospital doors described Owen as a popular colleague who had worked in the Antelope Valley for a long time.

"I know he was well-liked," said one sergeant who declined to give his name because he did not have authorization from command staff.

Others politely declined to speak about the shooting, but the pain of the day was etched on their faces.

"Honestly," said one deputy, his voice cracking slightly as he spoke, "I'm in no mood to talk."

Sheriff Jim McDonnell, who was in Hawaii for a conference and vacation when he received news of the shooting, said that Owen was survived by his wife, two adult sons, a stepdaughter and his mother. He said he was trying to return to Southern California as soon as possible.

"The tragedy of a deputy sheriff such as Sgt. Steve Owen making the ultimate sacrifice has a massive impact on the whole law enforcement family," McDonnell said in a statement.

Flags were lowered at the sheriff's Lancaster station Wednesday afternoon and the front doors locked.

Monica Chavez was the first to arrive with a bouquet of daisies, which she laid outside. Chavez, a 28-year resident of Lancaster, said she and her 85-year-old mother had been crying since they saw news of Owen's slaying on television. Chavez said the killing underscored the risks law enforcement officers face.

"I wanted to hug a few cops," she said as she lifted her sunglasses and wiped away tears. "But nobody is here."

Owen was part of a team of sheriff's deputies awarded the medal of valor in 2014 for showing "tremendous bravery and determination" in saving a hostage who was held at gunpoint in a car.

The deputies were credited with risking their lives during the Nov. 26, 2013, incident, while Owen was lauded for swiftly developing a strategy to detain the hostage taker.

Since the suspect was wearing a bulletproof vest and holding a gun to the hostage, Owen determined that it was impossible to fire a clean shot to hit him. Officials said Owen made the decision to use a Taser to bring the standoff to an end. He directed a deputy to fire the Taser through an open window of the car.

When the deputy shot his Taser, the hostage managed to quickly flee from the car. Another sergeant fired a second Taser, which penetrated the suspect's bulletproof vest, incapacitating him, according to the Sheriff's Department.

Owen's slaying marked the first fatal shooting of an on-duty law enforcement officer in L.A. County since Downey police Officer Ricardo Galvez was gunned down the night of Nov. 18, 2015. Galvez, 29, was shot while sitting in his car outside his police department's headquarters.

Before Wednesday, the most recent fatal shooting of an on-duty sheriff's deputy occurred in June 2005, when Deputy Luis Gerardo "Jerry" Ortiz, 35, was killed outside a Hawaiian Gardens apartment building while he was investigating a previous shooting involving Jose Luis Orozco. Orozco was later convicted of killing the deputy.

Since Ortiz's slaying, two other deputies have been fatally shot while off duty. Maria Cecilia Rosa, 30, was targeted in a robbery outside a friend's Long Beach home March 28, 2006, as she prepared to leave for work. Juan Abel Escalante, 27, was shot dead Aug. 2, 2008, outside his parents' Cypress Park home as he was leaving for work.