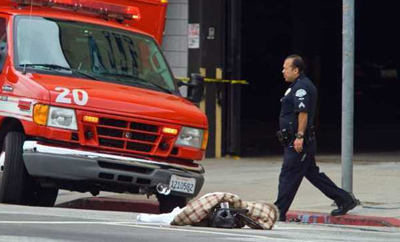 Los Angeles isn't known as a city for walking. Maybe there is a good reason - it's too dangerous.

Drivers in Los Angeles kill pedestrians and bicyclists at a significantly higher rate than drivers nationally, according to a study by the University of Michigan Transportation Research Institute.

In Los Angeles, pedestrians accounted for about a third of all traffic fatalities, or nearly triple the national average of 11.4%. About 3% of the fatalities were bicyclists. That compares with 1.7% nationally.

"This is a matter of exposure," said Michael Sivak, a professor at the institute and a study coauthor along with Shan Bao. "When you look at large urban areas you have a wider mix of road users."

The numbers are even worse in urban New York, where 49.6% of traffic fatalities were pedestrians and 6.1% were bicyclists.

The study, which compared crash rates in Los Angeles, New York and nationwide, examined data from the National Highway Traffic Safety Administration, California Highway Patrol and the New York State Department of Motor Vehicles. The database included 449,498 crashes within Los Angeles city limits, with 2,086 crashes that involved at least one death during the eight-year period of 2002 through 2009.

"You can look at the kinds of crashes in which the city is overrepresented and say that those are the areas that safety and traffic officials should pay more attention to," Sivak said.

About 20% of all trips in Los Angeles County are on foot or by bike, but less than 1% of transportation funding in the county goes to improvements for pedestrians and bicyclists, said Eric Bruins, planning and policy director for the Los Angeles County Bicycle Coalition.

One measure that bicycle advocates said would improve safety was vetoed by Gov. Jerry Brown on Friday.

Brown rejected legislation that would have required motorists to give bicyclists at least three feet of room while passing, or slow down - citing concern that it could cause more car accidents. Brown said he worried about requiring motorists to slow to 15 mph when passing bicyclists if there is not three feet between them.

In other findings, the University of Michigan researchers found that women who lived in Los Angeles were less likely to be in an accident than men. In the city, men accounted for a higher proportion of fatalities than the national average, 62.3% compared with 57.6%.

When considering the time of the day, crashes at night in Los Angeles constituted a higher percentage than the national average, 25.4% to 17.8% for the hours from 8 p.m. to 6 a.m. (The percentage of nighttime crashes in New York was the same as in Los Angeles.)

"This is most likely due to the fact that people are more likely to be out and about at night in the big cities than they are elsewhere," Sivak said.