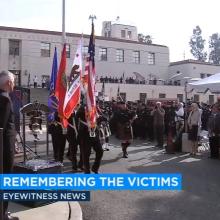 ELYSIAN PARK, LOS ANGELES (KABC) -- In the largest 9/11 remembrance ceremony of the West Coast on Tuesday, Los Angeles first responders remembered those who died during the terror attacks 17 years ago.

Terrazas spoke as he stood in front a steel beam salvaged from the World Trade Center. It was a vertical support once connecting the lobby to the second floor on the South Tower.

"The men and women of the Los Angeles Fire Department remember the 343 New York City firefighters killed that day while rushing into those two doomed buildings," he said.

The mayor of Paris, France also spoke, saying, "I feel your pain, and I share your grief."

From all those who lost their lives on 9/11, Welles Crowther was the only one to be mentioned by name during Tuesday's ceremony. The 24-year-old investment banker had applied to be a New York firefighter. He was later identified as "the man in the red bandana," who helped save at least five and as many as 18 people that day.

L.A. Mayor Eric Garcetti spoke about strength in the years since, with a message to never forget.