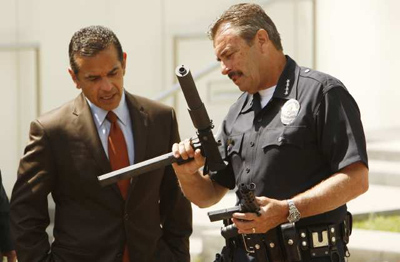 Los Angeles Police Chief Charlie Beck and Mayor Antonio Villaraigosa hold a news conference in May after an array of firearms were collected. Beck called L.A. the safest big city in America after the release of a midyear report on violent and property crime. (Al Seib / Los Angeles Times)

At the year's midway point, crime rates in Los Angeles generally have continued their decade-long decline, according to police figures released Wednesday.

The crime totals were announced by Los Angeles Police Chief Charlie Beck and Mayor Antonio Villaraigosa at a morning news conference. They heralded the continued fall in violent crimes with Beck calling Los Angeles "the safest big city in America."

Through the end of June, the city experienced just shy of 9,000 violent crimes, a category that includes homicides, rapes, robberies and aggravated assaults. The total marked a nearly 9% drop compared with the same time last year, according to LAPD figures. With 147 homicides committed so far this year, the rate of killing is about the same as 2010 and puts the city on pace to have fewer than 300 killings for the third consecutive year -- a historic benchmark that is four times lower than the peak Los Angeles reached in the late 1990s. Robbery and aggravated assaults also are down, and the number of rapes has risen slightly in 2012.

Gang crimes, a major factor in the city's crime landscape, also fell. Gang-related killings are down 8%, while the 405 people shot by gang gunfire represented a 21% drop.

The decline in violent crime was tempered somewhat by property-related crime statistics. Overall the number of burglaries, auto thefts, and other types of thefts fell by 1% throughout the city, but there were several areas of the city that saw significant increases. In areas patrolled by the LAPD's Central Bureau, for example, thefts rose by 9%. The department's South Bureau also had increases.

Beck attributed those increases, in part, to the state's on-going effort to lower its prison population through the so-called realignment law, under which some convicts now serve sentences in local jails instead of being sent to state facilities. Beck acknowledged it was not possible to know the exact impact the law is having on crime rates but said it would be "foolish" to assume it was not contributing to the rise in property crimes.

[Update, 7:26 p.m., July 11: In an interview with The Times, Beck explained why he believes the realignment law is contributing to increases in property crimes. Under the law, he said, offenders receive less supervision and assistance programs after being released and so are more likely to commit new crimes.]

"Crime is not down in all categories; crime is not down in all parts of the city," Beck said, "but ... our strategies in crime reduction are working. The course this department has charted, the course this administration has charted have had an extremely positive effect on Los Angeles. It wasn't so long that this city was known as the murder capital of the United States. That is not true any more."

In calling Los Angeles the safest big city in the country, Beck was comparing its per capita violent crime rate to Houston, Chicago and New York, the three other cities with at least 2 million residents. According to figures compiled by the FBI, the rate in L.A. is the lowest of the four.

The LAPD's overall success were contrasted by the Los Angeles County Sheriff's Department, which patrols the county's unincorporated areas and many of its smaller cities. Violent and property crimes in those areas rose 6% during the first half of this year, according to Sheriff's Department statistics.

The homicide total fell by 9%, giving Sheriff Lee Baca a bright spot in a largely disappointing midyear report. His department, he said, was "focusing on crime every day like never before."

"There is good news, but we are not ignoring the challenges," Baca said.