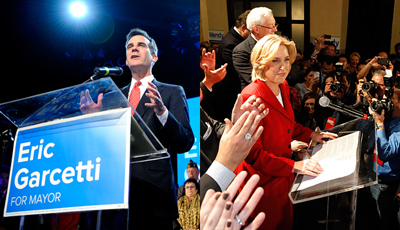 City Councilman Eric Garcetti and Controller Wendy Greuel remained ahead of the pack in the race for mayor of Los Angeles early Wednesday morning with all city precincts reporting.

The top-two finishers in Tuesday's election will face off in what is expected to be a bruising May 21 runoff. Only 16% of the city's 1.8 million registered voters cast ballots in the election.

Standing on a stage lined with supporters Tuesday evening, Garcetti thanked the those in the crowd for their help and said he's ready to get to work on winning the runoff election in May. Garcetti held a slim margin over Greuel and a significant lead over the six other candidates in the mayoral race, returns showed.

INTERACTIVE MAP: How your neighborhood voted

Greuel took the stage at 11 p.m. after being introduced by Assembly Speaker John Pérez to chants of "Wendy! Wendy! Wendy!"

"Although not all the votes are in, it sure looks good," Greuel said. She thanked the other candidates: "After 42 debates, I know what your priorities are. In fact, I could probably recite your best lines."

As with most elections, however, some ballots have yet to be tallied. The pool of uncounted votes usually consists of vote-by-mail ballots, including some that were turned in on election day, as well as provisional and damaged ballots.

Still, Garcetti and Greuel hold seemingly insurmountable leads over the next closest finishers -- attorney Kevin James and Councilwoman Jan Perry -- who appeared to be in a dead heat for third place, the vote count showed.

Emanuel Pleitez on Tuesday night conceded defeat as early returns showed he was capturing just a sliver of the vote.

"I'm feeling proud of what we accomplished, the issues we raised, the people we inspired and motivated in the city. At every turn, especially these last few days, there were people saying thank you for running, thank you for challenging the status quo," he said as he arrived at the M Bar in Boyle Heights to wait for the results with staff and supporters.

The vote for a measure to add a half-cent to the city's sales tax appeared to lose by a wide margin, the vote tally showed. The increase, Proposition A, would bring sales taxes in Los Angeles to 9.5%, one of the highest rates in the state, and raise $200 million a year for the city treasury.

In the race for city attorney, incumbent Carmen Trutanich, who lost a bid for L.A. County district attorney last year, trailed former Assemblyman Mike Feuer -- but still collected enough votes to face his opponent again in a May runoff election.

The race for controller remained too close to call, with City Councilman Dennis Zine running neck-and-neck with lawyer Ron Galperin. Just a few hundred votes separated the two candidates, ensuring that they will face off again in May.

In the slew of races for Los Angeles City Council, incumbents Paul Koretz on the Westside and Joe Buscaino in the Harbor district held major leads, vote tallies showed.

Eight of the City Council's 15 seats are up for grabs, setting the stage for the most dramatic change on the city's legislative body in a dozen years. With incumbents stepping down in six of those eight races, dozens of candidates stepped forward to seek seats on the council.

The free-for-all council race to represent the Hollywood-Silver Lake district remained up for grabs. A dozen political hopefuls are running for that seat, which was represented by Garcetti. The leaders in that race were former Garcetti aide Mitch O'Farrell and John Choi, a former member of the city's Board of Public Works.

In a district stretching from Westchester to Pacific Palisades, Mike Bonin appeared to win the seat outright -- without a runoff election. Bonin served as chief of staff to the district's current councilman, Bill Rosendahl, who is giving up the Westside council seat to focus on his fight against cancer.

In the race to replace Councilman Ed Reyes on the Eastside, former Assemblyman Gil Cedillo appears headed for a runoff against Reyes' chief of staff, Jose Gardea.

In the northwest San Fernando Valley, Assemblyman Bob Blumenfield (D-WoodlandHills) seemed to have captured a slim majority of votes, which would award him the seat without a runoff. Former Assemblyman Felipe Fuentes also appeared to be in the same position, winning a thin majority in the northeast valley.

Before the polls opened Tuesday, the city clerk's office had received 148,846 mail-in ballots from voters in the city, or 8.2% of the total number of registered voters. More people voted by mail than in the first round of either the 2001 or 2005 city elections, but there are also many more residents who received mail ballots this year than in those elections.