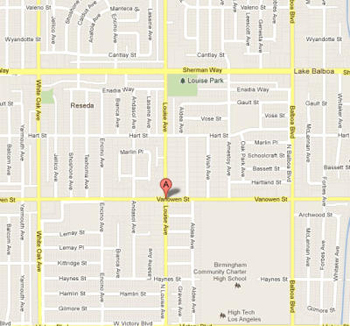 Two LAPD officers were injured Wednesday when a car crashed into their patrol cruiser in Lake Balboa, according to police.

The cruiser was heading east on Vanowen Street and was waiting to turn left onto Louise Avenue when a sedan heading west collided with the cruiser, according to Lt. Orlando Moreno of LAPD Valley Traffic Division.

Both officers in the patrol car were taken to Northridge Hospital with non-life threatening injuries in the 6:40 a.m. crash, Moreno said. The driver in the sedan was not transported.

Another person in a third vehicle that was slightly damaged at the site of a crash was also taken to the hospital for examination, according to police.

A second patrol car at the intersection was also slightly damaged, although it was still unclear how the damage occurred, Moreno said.

The cause of the accident was still under investigation.