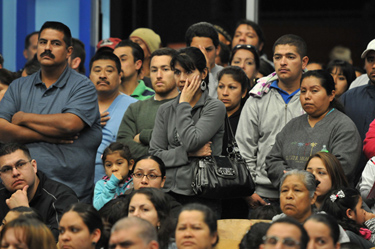 A standing-room-only crowd of parents and community leaders met at Hawaiian Avenue Elementary in Wilmington Thursday night to discuss recent murders and how to make the city safer. (Robert Casillas / Staff Photographer)

Police implored a standing-room-only crowd in Wilmington Thursday to get more involved in their neighborhoods and to pass on anything that might help them break the cycle of violence that has gripped the port community in the past two months.

The good news: Arrests have been made in two of the seven killings, according to Los Angeles Police Capt. William Hayes, commander of the LAPD's Harbor Division. A suspect has been arrested in a Jan. 24 homicide and in the Jan. 30 shooting deaths of two men at Pacific Coast Highway and Watson Road, he said.

The bad news? Another non-fatal shooting occurred just 30 minutes before Thursday night's meeting began at Hawaiian Avenue Elementary School. A coach was shot in the arm as practice was breaking up at a field at Q and Figueroa streets. Two men in their 20s, sitting in a silver-colored car opened fire on the group as they left the field.

Thursday's audience included many families who turned out to listen to Hayes and Los Angeles City Councilman Joe Buscaino talk about what was being done to quell the rash of killings that has plagued Wilmington since the first of the year.

Hayes said much of it can be linked to a "power struggle" among gang members.

Over the past few years, Hayes told the crowd, police have been targeting gangs and have "removed" some of the groups' leaders who are now incarcerated.

Now, he said, many of those gang members are fighting over "who's going to be the boss." 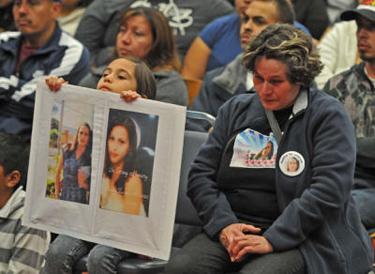 Some 30 additional officers and detectives from other divisions are now working the Wilmington and San Pedro areas as a result of the violence, authorities said.

And there are "significant leads," Hayes said, in the Feb. 25 shooting deaths of two teen-agers at the corner of F Street and Bay View Avenue.

"What we do need is more assistance from the community," he said.

On Wednesday, police arrested five Wilmington gang members "involved in violent crimes," Hayes said, in the ongoing effort to solve some of the cases. While not necessarily linked directly to the recent killings, those arrested may help police in their continuing search to find the perpetrators. Seven illegal guns were seized in those arrests and the gang members will at least face charges for that, police said.

But Hayes said the police need residents to pass on information when they see or hear something suspicious.

"None of this occurred in a vacuum," Hayes told the crowd. "There are people out there who saw bits and pieces of it ... We want to take these predators off the streets and put them in jail where they belong."

Buscaino, a former Los Angeles Police officer who was just elected a little over a month ago, pledged that he will work to bring community members together - and to bring more police resources to the Harbor Area.

"I get it," Buscaino said. "LAPD Harbor Division needs more resources, it's no big secret."

At one point, an emotional Buscaino told community members he was "fed up" with violence. He and Hayes have joined forces to establish Wilmington United, a new group designed to bring together community members in a show of unity to break the cycle. 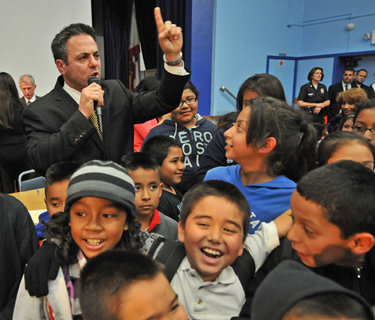 The mile-long "solidarity" walks that drew hundreds of Wilmington residents earlier this month also will resume, Hayes said, adding that the early evening candlelight gatherings provide officers with a good way to network in the community. The next walk will be at 6 p.m. March 14 starting at Hawaiian Avenue Elementary School, he said. Subsequent weekly walks will take place throughout Wilmington, with the locations to be announced in advance.

One audience member, however, expressed some frustration.

"Whatever we're doing now about these murders, it's not working," he told officials. "It's not working at all. What can we come up with tonight?"

At that point, Buscaino took the microphone and asked everyone who believed "enough is enough" to stand.