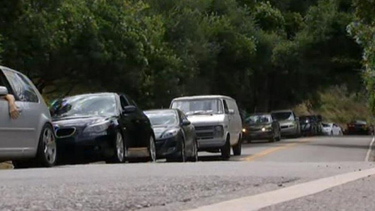 Carmageddon is just around the corner. Some commuters think they've figured a way around the 3-day closure of the 405 Freeway in the Sepulveda Pass. They think the winding canyon roads that link the Westside to the San Fernando Valley are the answer.

When LA freeways are backed up, LA's scenic canyon roads are a popular shortcut. That's why those living in the canyons are dreading Carmageddon and the spillover onto surface streets and canyon roads.

The most affected north-south routes east of the 405 will be Beverly Glen, Benedict Canyon, Coldwater and Laurel Canyon.

"There are back roads" said canyon resident Aaron Barker. "Nichols Canyon is there. I'll use that or an alternate route."

While the LAPD is not blocking the roads, they say it's not a good idea to use them.

"That's a mistake," said LAPD spokesman Andy Neiman. "Everyone's going to have the same thought. There is no easy way around the closure."

The LAPD, which is pre-deploying most of its traffic officers to the affected areas says there will be no such thing as a shortcut during Carmageddon.

"The easy way around is to stay local. Stay home," suggests Neiman. "If you try to drive and bypass anywhere near the shutdown you're going to be severely frustrated."

Canyon resident Heinz Altieri, who gets from here to there on his motorcycle, is taking the whole thing in stride: "Less traffic down the road... that's the idea we should be thinking, instead of 'Oh My God what are we gonna do?"