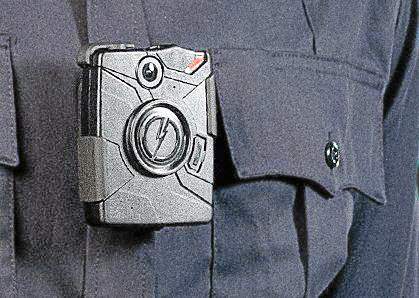 The Taser company's Axon body on-officer camera is seen clipped to an officer's uniform in this image from the company's web site. (Photo courtesy Taser)

Hundreds of body cameras have been delivered to the Los Angeles Police Department and are expected to be put in use starting this summer, officials said Tuesday.

The cost of the devices, as well as two years of storage, are covered by about $1.5 million in private donations made through the Los Angeles Police Foundation, the result of a fundraising drive started by commission President Steve Soboroff.

Once a policy is drawn up on how to use the cameras, the devices will be used at the Newton, Central and Mission divisions.

The department is in the midst of talks with the police officers' union to discuss usage rules for the cameras, Chief Charlie Beck said after the meeting, adding the cameras will "complement in-car video perfectly."

The LAPD is potentially getting even more cameras, with Mayor Eric Garcetti proposing to ramp up the number by 7,000 in his upcoming budget so that every LAPD patrol officer will have one.

The board also adopted new policies - detailed in an Office of the Inspector General's report - on the LAPD's in-car digital camera program, which is in place at South Bureau and is being expanded to Central.

The Inspector General's review said the department has agreed to revised policies for the use of the cameras, such as keeping written logs on police stops as backup for the cameras and defining tampering with the cameras as misconduct.

In some cases discovered in the testing phase, digital in-car video footage was incomplete because the action occurred off-camera, the audio was not recorded or there was a delay in turning on the camera.

The IG will also now check footage taken by the dashboard cameras on a regular basis, partly as a way to improve police training. The LAPD previously studied only the footage from major incidents such as police shootings and other use-of-force situations.

Soboroff said the "timing is perfect" for the Inspector General and the LAPD to make improvements to the in-car digital camera program, considering "where we are in the creation of the policy that will be coming on the on-body cameras."

The report gives a "frank and open look" at the in-car video program, detailing "what can we do better and what we are doing right, and the improvements that have been made" in recent months, he said.