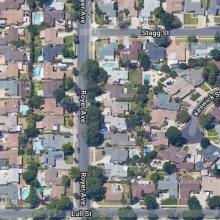 A Los Angeles Police Department bomb squad detonated explosives early Thursday morning that were found inside a home in West Hills the night before.

Officers were called to a home on the 7600 block of Royer Avenue, between Lull and Stagg streets, around 9 p.m. Wednesday, and discovered the explosives, according to the LAPD.

There was no immediate word on arrests.