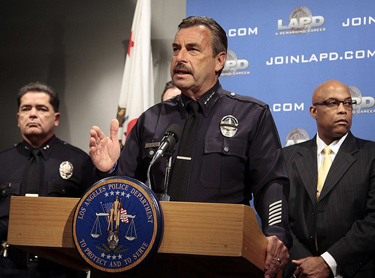 Speaking at a news conference during which he offered little new information on the investigation into the attack at Dodger Stadium, LAPD Chief Charlie Beck said the department would present its case to prosecutors "in the near future." (Jason Redmond / Associated Press / May 26, 2011)

A day after police put Giovanni Ramirez, a suspect in the near-fatal beating of San Francisco Giants fan Bryan Stow at Dodger Stadium, before witnesses in identification lineups, LAPD Chief Charlie Beck on Thursday reaffirmed his belief that Ramirez was the primary suspect and principal assailant in the attack.

Speaking at a news conference during which he offered little new information on the continuing investigation, Beck also said the Los Angeles Police Department would present its case to prosecutors "in the near future."

Ramirez, a 31-year-old gang member, "is, and was, and has been our primary suspect [in] the Stow beating," Beck said.

Ramirez is believed by police to be one of two men who assaulted Stow, a Santa Clara paramedic, after the Dodgers' opening day game March 31. Stow suffered brain damage and remains in critical condition at San Francisco General Hospital.

"We continue down that road in our preparation of presenting a case to the district attorney in the near future," Beck said. "But we will not present that case until we have an abundance of evidence, and we have looked at a number of things that are still being examined."

Asked whether he remained as confident as he was on the day Ramirez was arrested that police had the correct man in custody, Beck added: "Absolutely ... I am as sure as you need to be to make an arrest and pursue a prosecution."

Beck declined to discuss the outcome of the identification lineups Wednesday night, when multiple witnesses were asked if they recognized one of the attackers from a group of men, which included Ramirez. Beck said only that the results of the lineups "added to the evidence" against Ramirez.

With the second assailant and a woman who drove the men away from the stadium still at large, Beck emphasized that the investigation remained active, with 20 detectives assigned to it and a $250,000 reward still available.

Beck did not give a specific timeline for when he expected detectives to formally request prosecutors to file criminal charges against Ramirez, who is being held in custody on suspicion that he violated the terms of his parole from prison.

Next week, a hearing is expected to be held to determine whether Ramirez violated his parole.

If Ramirez is found to have been in violation, he probably would be sent back to prison for several months, which would allow police more time to continue their investigation without quickly having to seek charges against him. Typically, a suspect must be charged with a crime and brought before a judge within a few days of being arrested.

Deputy Chief Jose Perez, speaking after Beck departed, declined to discuss claims made by an attorney representing Ramirez's relatives that Ramirez was not at the opening day game and that several people could provide an alibi for him.