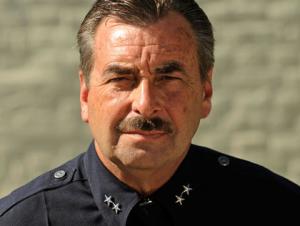 The effort to make drivers licenses available to illegal immigrants received a boost today with the publication of remarks by Los Angeles police Chief Charlie Beck, who said it should be done. (Kevork Djansezian/Getty Images File Photo)

"Public safety is my number one priority," Beck said in an impromptu news conference in front of police headquarters. "I'm chief of police. I make decisions based on public safety. ... This would increase drivers' safety."

Beck said prohibiting undocumented immigrants from obtaining driver's licenses has led to the problem of "a de facto class of drivers outside the law," and he said such motorists have no incentive to obtain insurance, or stop at the scene of an accident and cooperate with authorities.

"We have to deal with reality," Beck said. "Unlicensed drivers are an issue."

The chief has become one of the most prominent local figures to support an idea that state lawmakers have battled over repeatedly in the last 15 years. His stance seems likely to further inflame critics already angry at the chief for his efforts to liberalize rules on how his officers impound the cars of unlicensed drivers.

"My personal belief is that they should be able to" have licenses, Beck said earlier in response to a question during a meeting with Los Angeles Times reporters and editorial writers.

"The reality is that all the things that we've done -- 'we' being the state of California -- over the last 14, 16 years have not reduced the problem one iota, haven't reduced undocumented aliens driving without licenses," he told The Times.

"So we have to look at what we're doing. When something doesn't work over and over and over again, my view is that you should reexamine it to see if there is another way that makes more sense."

Beck noted that he does not believe licenses for illegal immigrants should be identical to standard licenses. Saying that "it could be a provisional license, it could be a non-resident license," he acknowledged that state officials would have to find ways to address widely held concerns that giving licenses to people in the country illegally could make it easier for terrorists to go undetected.

Such concerns, however, were outweighed for Beck by what he said would be improved safety on California's roads and the ability of police to identify the people they encounter.